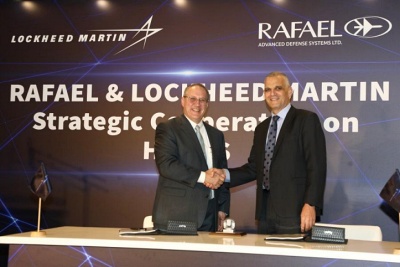 The collaboration, building on Rafael’s long-standing efforts as part of Israel’s “IRON BEAM” laser-based defense project, is also expected to result in a variant of the system suitable for the US market and elsewhere.

Rafael says that in the past year it has proved the operational capability of its IRON BEAM project, which is based around 100 kW-class fiber lasers.

The resulting system is expected to provide effective ground-based air defense against threats including rockets, mortars and unmanned aerial vehicles (UAVs), or drones.

Force multiplier
Rafael’s CEO Yoav Har-Even, a retired Major General, said of the deal: “This strategic teaming agreement serves as a force multiplier for Rafael and the Israeli market. We are working to ensure our customers receive the most advanced, effective, and best-in-class systems. This agreement will expand and diversify the capabilities we can offer to a variety of customers.”

According to Har-Even, Rafael and the Israeli Ministry of Defense's Directorate of Defense Research and Development (DDR&D) have been working on the laser systems for three decades.

“We expect [this] to become the first operational laser defense system of its kind,” added the CEO. “This serves as a clear example of Israeli-made capabilities leading to strategic cooperation which will greatly benefit both sides.”

But whereas IRON DOME and other ballistic air defense systems rely on the costly method of firing projectiles at incoming threats, the laser-based approach ought to be far more cost-effective and operationally efficient.

‘Unique capability’
Lockheed’s COO Frank St. John added in a joint release from the two companies: “Working with Rafael, our joint team will help bring this new, life-saving capability to our customers.

Ran Gozali, who heads up the “land and naval systems” directorate at Rafael, said: “We see the capability of IRON BEAM, which was developed alongside the DDR&D, as a technological breakthrough, with its proven effectiveness against some of the most sophisticated threats including rockets, mortars, drones and UAVs, including in swarms. 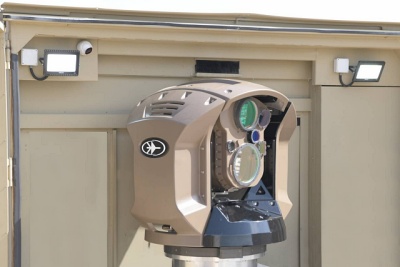 Joshua Shani, who leads Lockheed’s business in Israel, added: “Lockheed Martin is entering a new area of operations in Israel. Now, we step into the high-energy laser era and look forward to fielding operational, reliable, and highly-effective systems with teammates such as Rafael.”

Power scaling
Like Rafael, Lockheed has been working on laser weapons technology for decades. It has been at the forefront of developments in the US since taking part in the US Army-backed Robust Electric Laser Initiative (RELI), and further advanced its capability with the 2008 acquisition of fiber laser developer Aculight.

The company demonstrated a 30 kW fiber laser weapon in early 2014, followed by a 60 kW combined fiber laser that was shipped to the US Army in 2017.

However, a power of at least 100 kW has generally been regarded as necessary for a laser weapon to shoot down mortars and small drones at sufficiently large stand-off distances to be useful, making Lockheed’s delivery of a 300 kW laser to the US Army earlier this year perhaps the most significant development to date.

The new IRON BEAM systems will instead use a 100 kW-class sources, with the promise of pinpoint accuracy at stand-off distances of several kilometers, reduced collateral damage, and unlimited firepower at a very low cost - so long as power remains uninterrupted.