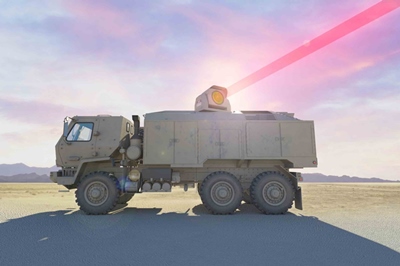 A team led by US technology development firm Dynetics is to build and test a 100 kW laser weapon for the US Army.

The Dynetics-Lockheed team, which is understood to have beaten rival Raytheon in the final down-select stage of the program, is set to deploy a system based on spectrally combined high-power fiber lasers. Last year, both teams were awarded $10 million development contracts.

Battlefield reality
According to the program schedule, the mobile 100 kW weapon will be mounted onto a US Army truck and tested at White Sands Missile Range in New Mexico, likely in three years from now.

Tyler Griffin, director of laser and sensor systems at Lockheed, said in a Dynetics release: “We are thrilled with the opportunity to partner with Dynetics and the US Army in making laser weapons a battlefield reality.

“Our research and development continue[s] to reduce technical and operational risks, and those advancements will directly contribute to Team Dynetics delivering a ruggedized, safe, and effective demonstrator for the Army's HEL TVD program.”

While Lockheed will bring to the table its long-standing high-power laser expertise, developed partly under programs like the Army-backed Robust Electric Laser Initiative (RELI), and partly through its 2008 acquisition of fiber laser developer Aculight. Other key development projects have included the ATHENA and ALADIN laser programs, along with similar efforts supported by the US Air Foece and US Navy.

Those efforts led to the demonstration of a 30 kW fiber laser weapon in early 2014, and a contract to build a modular 60 kW version for the US Army shortly afterwards. However, a power of 100 kW has generally been felt necessary for a laser weapon to be capable of shooting down mortars and small drones at sufficiently large stand-off distances to be useful. 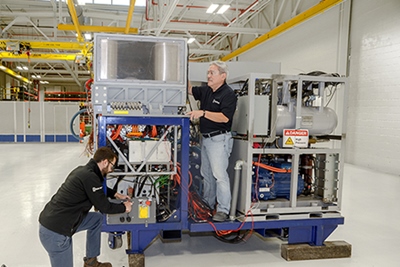 The thermal management element is critical, as even today’s highly efficient fiber lasers create a colossal amount of heat when integrated to produce a 100 kW laser output.

It adds that the system offers instantaneous power availability –crucial for the laser to respond rapidly to an airborne threat - and “endless” operation, for as long as the system is fuelled.

Mark Wilson, the LibertyWorks COO, said: “These milestone achievements serve as a foundation to provide our customers with an operational solution to provide endless power capability today.

“This enables directed energy customers to move past current low-power, low duty-cycle demonstrations by solving many of the difficult issues integrating high-power output with matching levels of thermal management. The Rolls-Royce LibertyWorks technology demonstrator is proving out capability suitable for ground, naval and air platforms.”

The next steps will see Rolls-Royce conduct final testing with the integrated power and thermal management system technology demonstrator at the LibertyWorks facility in Indianapolis, followed by customer field testing later this year.

It is expected that the project will result in a system that could be used to power directed energy applications across multiple customer platforms.