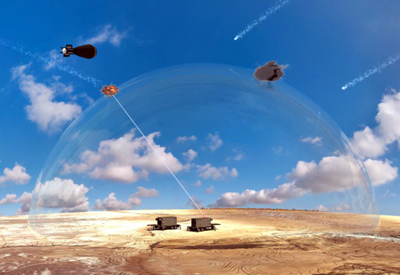 Israel’s Armed Forces Development & Technological Infrastructure Administration (MAPA) has achieved a “technological breakthrough” that will allow the development of powerful laser-based systems for intercepting steep orbital threats, anti-aircraft and tiny aircraft including drones). Its launch statement added that the new technology will “bring about a strategic change in Israel's air defense capabilities.”

The Israeli Ministry of Defense said the breakthrough was the result of collaboration between its Directorate of Defense Research and Development (DDR&D), the companies Rafael and Elbit Systems, and academic institutions.

"These achievements were made possible by the development of electric-source laser systems in replacement of chemical laser technology," it said in the launch statement of January 8 (Hebrew).

"Using the new technology, the defence establishment has succeeded in precisely focusing the beam on long-range targets, including overcoming atmospheric disturbances."

"This technology enables the development of highly effective operational systems that will serve as an additional layer of defence to secure the state of Israel by air, land, and sea," it added, saying future laser weapons could intercept a variety of threats that include unmanned aerial vehicles (drones), rockets, and anti-tank missiles.

Today the DDR&D has revealed a technological breakthrough in the development of high-energy lasers for the interception of long- range threats. This technology will prompt a strategic change in the defense capabilities of the State of Israel.
Take a look!https://t.co/KG3a4wvZQM

Israel’s MoD has announced the launch of three programmes for the further development of laser demonstrators: a ground-based system designed to complement Israel’s existing “Iron Dome” counter-rocket system, a mobile ground system for protecting personnel in the field, and an airborne system to intercept threats above cloud-cover and provide wide-area coverage.

Over the years, the IAF has invested considerable efforts in advancing powerful laser technology. Hitherto, many developments, both from Israel and abroad, have been tested and proven to be ineffective.

The technological breakthrough is based on laser beam accuracy. Using the new technology, the defense system has been able to target and stabilize the beam on a long-range target, including overcoming atmospheric disturbances. This technology enables the development of effective intercepting systems, with high operational efficiency, that will form another layer in the effort to protect the State of Israel by air, land and sea.

Head of R&D at Mapa, Brigadier General Yaniv Rotem: "We are entering a new era of 'energy warfare' in the air, land and sea. Investment in R&D in recent years has placed Israel among the leading countries in the field of laser power. During 2020, we will be demonstrating laser capabilities in the field."