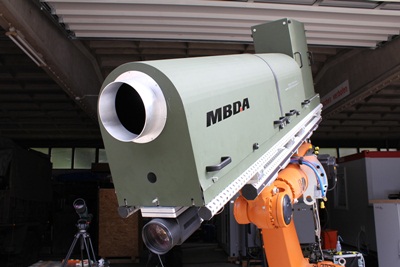 The German subsidiary of MBDA, the missile systems company that is jointly owned by the European aerospace and defense giants BAE Systems, EADS and Finmeccanica, says that the solid-state laser weapon it is developing has now reached an output power of 40 kW.

The power level exceeds the 25 kW levels achieved so far by US rivals – and the company says that it will shortly begin testing the system at a “proving ground” in Oberjettenberg, with the aim of shooting down an airborne target for the first time.

MBDA says it has generated such high powers by using fiber lasers combined with its own patented beam coupling technology to maintain high beam quality – crucial for the lasers to be effective at large stand-off distances. In recent firing tests, the laser is said to have burned through mortar shells and pierced 40 mm-thick steel plates “in a few seconds”.

“The tests demonstrated the good beam quality of the lasers used and the precise and low-loss merging of the individual beams,” announced the company in a statement. “This is the only way to ensure that targets are neutralised rapidly and reliably.”

Output power quadrupled
The latest firing rounds represent a rapid increase in output power since tests began in 2008, and after the company demonstrated a 10 kW system in September 2011. That 10 kW laser was able to hit a target from 2.3 km away, under what MBDA described as “real-life environmental conditions” and with an altitude difference of 1 km – and if the 40 kW system can maintain the same level of beam quality, those figures ought to be increased dramatically in the forthcoming tests.

“High-power laser weapons can soon provide an answer to conventional and asymmetric threats in military missions,” said Peter Heilmeier, head of market and business development at MBDA Germany. “They can contribute greatly to protecting our troops. Laser weapons are characterised by precision at long ranges, minimum operating costs and the avoidance of collateral damage."

The company is likely to present more details of its beam-combining technology at the forthcoming SPIE Europe Defense + Security conference, which is being held in Edinburgh later this month. MBDA Germany’s talk, entitled “High-power beam combining: a step to a future laser weapon system”, will feature in the conference session on High-Power Lasers: Technology and Systems on Monday, September 24.

Shareholder merger impact?
The development of “directed energy” weapons - as they are known more correctly - has become a high-profile field of development, with rapid progress in solid-state and fiber laser designs. The SPIE conference also features talks from Lockheed Martin Aculight on the Robust Electric Laser Initiative (RELI), as well as a plenary address by Mark Neice, director of High Energy Laser Joint Technology Office.

MBDA’s development of the fiber laser demonstrator is being financed partly via the company’s own funds and in part by the German Federal Office of Defence Technology and Procurement (BWB).

Earlier this week MBDA’s two major shareholders, EADS and BAE Systems, announced that they were in talks to merge – a deal that could have a major impact on the global aerospace and defense market if it does get the go-ahead from shareholders and regulators. Currently the two firms each own a 37.5% share in MBDA, with Finmeccanica owning the remaining 25%.

Last month, the US Navy published a broad area announcement (BAA) inviting proposals for the rapid development and demonstration of a ship-based solid-state laser weapon. The document outlines a phased $110 million program to scale laser output powers from 25 kW to 100 kW for a largely autonomous weapon that could be deployed in a US Navy “program of record” from 2016 at the earliest.