Contract to build on accomplishments of US Army's "RELI" project. 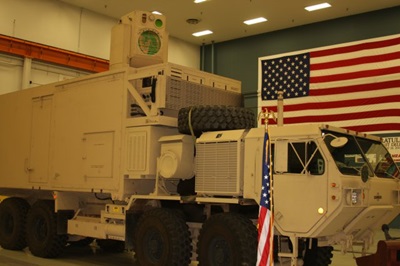 The US Army has awarded Lockheed Martin a $25 million contract to design, build and test a “weapons-grade” 60 kilowatt fiber laser system.

Building on the technological achievements of the Robust Electric Laser Initiative (RELI) project – Lockheed demonstrated a 30 kilowatt laser earlier this year – and the fiber laser expertise of its Aculight subsidiary, Lockheed plans to integrate and test the laser in a truck-mounted weapon system demonstrator.

The deal follows news that the US Navy is set to deploy a solid-state laser weapon on board the USS Ponce within months. Under the Office of Naval Research (ONR) Solid-State Laser - Technology Maturation program, industry teams led by Northrop Grumman, BAE Systems and Raytheon have been selected to develop combat-ready laser prototypes.

While a 100 kilowatt source has generally regarded as the benchmark power needed for downing remote, fast-moving targets, Lockheed says that at 60 kilowatt the directed-energy weapon is designed to be fired at hostile rockets, artillery, mortars and drones.

Under a contract managed by the US Army Space and Missile Defense Command’s Technical Center, the fiber laser will be integrated on the High Energy Laser Mobile Demonstrator (HEL MD) - essentially an Army truck adapted to carry the laser and its accompanying cooling system (see photo).

“Our solution is much smaller, lighter and more electrically efficient than others in the market and can bring tremendous value to the Army and other military customers.”

The system combines multiple fiber laser modules to generate the necessary power output and the high beam quality needed to maintain the laser’s effectiveness at remote distances, as well as the high electrical efficiency crucial for reducing cooling requirements and keeping the overall system to a truck-mountable size.

Lockheed uses a spectral beam combining technique so that several fiber lasers operating at slightly different wavelengths can be turned into a single 60 kilowatt beam of light.

According to the company, the advantages of fiber lasers means that its system will use around only half of the electrical power consumed by alternative solid-state laser technologies.

The recent progress follows Lockheed’s 2008 acquisition of Aculight. The subsidiary is based out of a 69,000 square-foot laser research and development center near Seattle in Bothell, Washington.

Aculight also produces a range of fiber lasers for scientific applications, including the “Argos” optical parametric oscillator for high-resolution spectroscopy that was shortlisted for this year’s Prism Awards.