Arms firm says that record-breaking laser weapon is ready to be integrated with US Department of Defense demonstrations. 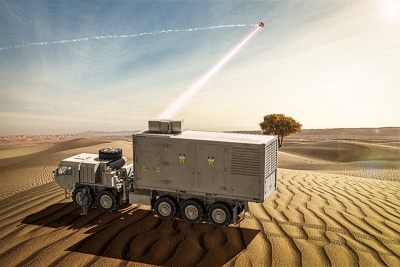 Giant US defense contractor Lockheed Martin says it has delivered a 300 kW electrically driven laser - the most powerful it has ever produced - for weapons demonstration efforts by the US Army.

The directed energy weapon is a scaled version of Lockheed’s high-energy laser architecture, and is based around spectral beam-combining of lasers emitting at slightly different wavelengths.

Described as “tactically relevant”, the 300 kW laser is said to be ready for integration in projects, including the US Army’s Indirect Fires Protection Capability-High Energy Laser (IFPC-HEL) Demonstrator laser weapon system - with laboratory and field tests expected later this year.

The key difficulties have included generating sufficient power with good efficiency, and the ability to control the propagation of a well-collimated beam through a turbulent atmosphere - a problem that adaptive optics promises to solve.

Ahead of schedule
Back in 2019, the Office of the Under Secretary of Defense for Research & Engineering OUSD (OUSD) had selected Lockheed Martin to scale its spectrally combined high-energy laser to the targeted 300 kW benchmark, as part of the “High Energy Laser Scaling Initiative” (HELSI).

Lockheed claims that its team recently hit that milestone ahead of schedule, with Rick Cordaro, its VP of Advanced Product Solutions, saying:

“Lockheed Martin increased the power and efficiency and reduced the weight and volume of continuous-wave high energy lasers which reduces risk for future fielding efforts of high-power laser weapon systems.”

The company says that the achievement was made possible by significant investments in directed energy technology and the contributions of its dedicated team in Washington state and Owego, New York.

The OUSD wants directed energy weapons - which could include high-power microwave sources and high-energy particle beams as well as lasers - to enable precision disruption, damage, or destruction of military targets at long range.

“Directed energy systems will allow the [DoD} to counter a wide variety of current and emerging threats with rapid responses and engagement at the speed of light,” states the office on its web site.

Lasers for Army, Navy, and Air Force
The defense contractor has previously worked on a number of directed energy programs aimed at developing high-energy lasers for military use.

Those include the US Army-backed Robust Electric Laser Initiative (RELI), while the company also advanced its offering with the 2008 acquisition of fiber laser developer Aculight.

Other key development projects have included the ATHENA and ALADIN laser programs, along with similar efforts supported by the US Air Force and US Navy.

Those efforts led to the demonstration of a 30 kW fiber laser weapon in early 2014, and a contract to build a modular 60 kW version for the US Army shortly afterwards. However, a power of at least 100 kW has generally been regarded as necessary for a laser weapon to be capable of shooting down mortars and small drones at sufficiently large stand-off distances to be useful.

Then in 2017, Lockheed shipped a 60 kW combined fiber laser to the US Army - a record-breaking power at the time - while also winning contracts with the US Navy and US Air Force for similar hardware.

And just last month Lockheed said that it had delivered a 60 kW-class high-energy laser with integrated optical-dazzler and surveillance (HELIOS) for the US Navy.

“HELIOS enhances the overall combat system effectiveness of the ship to deter future threats and provide additional protection for sailors, and we understand we must provide scalable solutions customized to the Navy’s priorities,” said Cordaro at the time.

“It represents a solid foundation for incremental delivery of robust and powerful laser weapon system capabilities.”