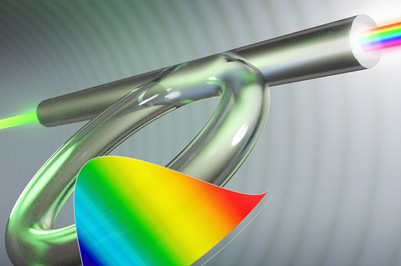 Now researchers at the University’s Institute of Optics have produced those same high-powered pulses — known as chirped pulses — in a way that works even with relatively low-quality, inexpensive equipment. They say that the new work could pave the way for:

In a paper published in Optica, the researchers describe the first demonstration of highly chirped pulses created by a using a spectral filter in a Kerr resonator — a type of simple optical cavity that operates without amplification.

These cavities have stirred wide interest among researchers because they can support “a wealth of complicated behaviors including useful broadband bursts of light,” said coauthor William Renninger, assistant professor of optics. By adding the spectral filter, the researchers can manipulate a laser pulse in the resonator to widen its wavefront by separating the beam’s wavelengths.

The new method is advantageous because “as you widen the pulse, you’re reducing the peak of the pulse, and that means you can then put more overall energy into it before it reaches a high peak power that causes problems,” said Renninger.

The new work is related to the approach used by Nobel laureates Donna Strickland ’89 (PhD) and Gerard Mourou, who helped usher in a revolution in the use of laser technology when they pioneered chirped pulse amplification while doing research at the University’s Laboratory for Laser Energetics.

The new work takes advantage of the way light is dispersed as it passes through optical cavities. Most prior cavities require rare “anomalous” dispersion, which means that the blue light travels faster than red light. However, the chirped pulses live in “normal” dispersion cavities in which red light travels faster. The dispersion is called “normal” because it is the much more common case, which will greatly increase the number of cavities that can generate pulses.

Prior cavities are also designed to have less than one percent loss, whereas the chirped pulses can survive in the cavity despite very high energy loss. “We’re showing chirped pulses that remain stable even with more than 90 percent energy loss, which really challenges the conventional wisdom,” said Renninger.

“With a simple spectral filter, we are now using loss to generate pulses in lossy and normal dispersion systems. So, in addition to improved energy performance, it really opens up what kinds of systems can be used.” Other collaborators include lead author Christopher Spiess, Qiang Yang, and Xue Dong, all current and former graduate research assistants in Renninger’s lab, and Victor Bucklew, a former postdoctoral associate in the lab.