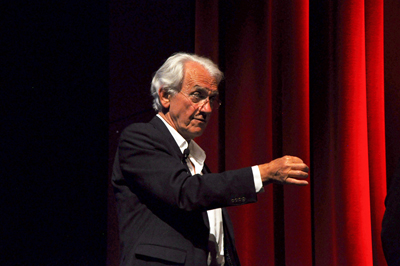 One of the hottest tickets at the World of Photonics congress on Monday was the plenary by Nobel Laureate Gérard Mourou, who, alongside his colleague Professor Donna Strickland, jointly won last year’s Physics Nobel Prize for the invention of chirped pulse amplification; CPA creates ultra short, high-intensity petawatt laser pulses.

Besides the excitement of a tutorial from one of the greatest living names in laser physics, the packed audience also enjoyed an extended Q&A after the presentation, which covered his work but also included Prof. Mourou’s tips on how a young person might win a future Physics Nobel Prize.

In the talk, Prof. Mourou acknowledged the work of his colleague Donna Strickland, as well as laser inventor Theordore Maiman. He went on to describe some of the applications of his work in the field of CPA, which creates the highest possible peak power laser pulses.

“There is a very positive outlook for CPA in nuclear medicine, such as proton therapy for treating cancers and tumors,” he said. “We can precisely control activation and penetration depth.” CPA could also be used to mitigate nuclear waste, converting long-half-life hazardous radioactive material into more benign isotopes. It could also provide a solution to the growing problem of space debris in earth orbits.

But the most excitement for the audience of photonics industry figures, fellow academics and innumerable students came in the entertaining interactions when the slides were over.

Moderator Prof. Matthias Kling (of LMU, Munich) asked, “From your CPA work, what do you think will have the greatest impact on the world over the next 20 years?"

Prof. Mourou replied, “Without any question it will be the transmutation of nuclear waste. Because that will make nuclear energy more clearly available. Right now there is no way that we can maintain the rate of the world’s energy consumption. So we have to develop some process like this by making the waste processable, to make nuclear energy more acceptable.”

A related question from an audience member followed: “Do you think we will be able to synthesize atoms and harvest protons to make a proton accelerator or to make proton batteries?” 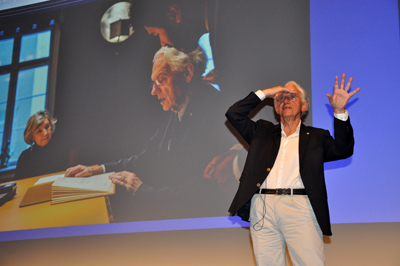 Prof. Mourou answered, “This is actually two completely different things. Right now we are working on transmutation because we have millions of tons of nuclear waste to deal with. And batteries and proton sources, certainly possible, but those things are not my speciality at the moment.”

A further, related question was: “What is the efficiency of the energy equation to achieve nuclear transmutation? Prof. Mourou said, "It comes down to efficiency. It turns out that in the process you gain energy but I don’t want to be too greedy so I am not so worried about the efficiency. It is important enough that that we can achieve transmutation.”

Somebody then asked, “What is the maximum absolute power that could be obtained by CPA and how can you prevent it from being used as a military application?”

The power could be say 10 to the power of 35 watts per square centimetre,” said Prof. Mourou, somewhat amused. “But the reason this technique is not applicable to the military is because this power has no energy. A CPA pulse only has a few joules of energy. You cannot destroy anything with a few joules. You probably ate a million joules of energy for your breakfast today,” he said, causing much laughter in the hall.

A student asked the professor, “What do you think, is the laser now a tool or is there much more fundamental science to be done with it?”

He answered, “Absolutely more work, just as I mentioned. We want to be able to produce this high intensity in the X-ray region, so there is a lot of thought on how to do this with accelerators. So we can still do this much better or differently than we can today.

“We can produce this high intensity on the X-ray regime so we could do it maybe better with a bit of difficulty. We need to boost the intensity by at least two orders of magnitude, in my opinion.”

How to win a Nobel Prize

Finally somebody asked the question that almost everybody in the room must have really been wondering about: “What would you recommend young people working in physics to do today if they wanted to win a Physics Nobel Prize, in the future?”

Prof. Mourou must have been asked this frequently in the past year, as he replied, “I always say to young people, don’t make it the objective of your work to win the Nobel Prize. When I was doing this CPA work with Donna Strickland 30 years ago we were not thinking about the prize. So I think you just have to do your best in whatever area you are working.”