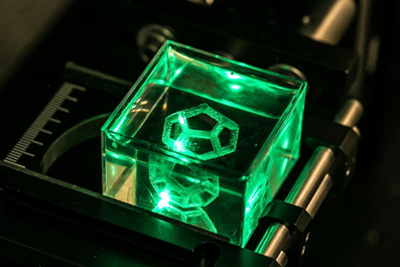 Researchers have developed a new laser-based process for 3-D printing intricate parts made of glass. With further development, the new method could be useful for making complex optics for vision, imaging, illumination or laser-based applications.

“Most 3-D printing processes build up an object layer by layer,” said research team leader Laurent Gallais from The Fresnel Institute and Ecole Centrale Marseille, in France. “Our new process avoids the limitations of these processes by using a laser beam to transform—or polymerize—a liquid precursor into solid glass.”

In Optics Letters, Gallais and research team members Thomas Doualle and Jean-Claude Andre demonstrate how they used the new technique to create detailed objects in a 3-D volume without using the classical layer-by-layer approach. Using this approach, they created a variety of silica glass objects such as miniature models of a bike and the Eiffel Tower without any pores or cracks.

The 3-D printing approach is based on multiphoton polymerization, which ensures that polymerization, a process that links liquid monomer molecules together into a solid polymer, only takes place at the precise laser focal point. It allows direct fabrication of 3-D parts that range in size from a few microns to tens of centimeters with a resolution that is theoretically only limited by the optics used for laser beamshaping.

“Glass is one of the primary materials used to make optics,” said Gallais. “Our work represents a first step toward developing a process that could one day allow scientists to 3-D print the optical components they need.” 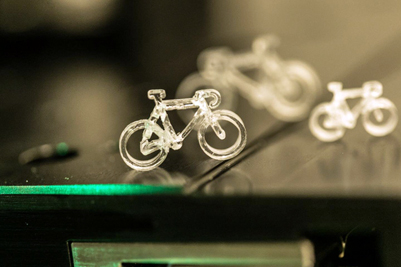 Using a traditional layer-by-layer approach to build 3-D glass objects comes with several limitations. The speed of the printing process is limited by the time it takes to build the layers, and it can be difficult to create layers with consistent thicknesses when using highly viscous resins. Making complex parts typically requires supports, which must be precisely positioned and then removed once the object hardens.

To accomplish this, the researchers used a mixture containing a photochemical initiator to absorb the laser light, a resin and high concentration of silica nanoparticles. In addition to working well with the laser, this mixture's high viscosity allows a 3-D part to be formed without deformation problems or supports to keep the object in place during 3-D printing.

“Critical to the technique were high power ultrashort lasers based on Strickland and Mourou's chirped pulse amplification technology recognized with a Nobel prize in 2018,” said Gallais. “Only intense and very short pulses will create non-linear photo polymerization with high precision and no thermal effects.”