Talk considers challenges in power scaling ultrafast sources; state of the art in thin disk multipass lasers, and their future.

Dr. Abdou Ahmed joined the university’s Institut für Strahlwerkzeuge in 2004, working mainly on the development of polarization and wavelength selective optics for high-power solid-state lasers. For the past decade, he has been responsible for the “laser development and optics” department. Dr. Abdou Ahmed and his team are focusing on ultrafast and high-power thin-disk laser systems, and temporal and spatial beam shaping optics.

“There are two main challenges when we want to scale the average output power and peak powers of your ultrafast lasers,” he said. “The first is thermal management; you have to develop a concept that allows you to increase the surface to volume ratio so you can mitigate the thermal load in your laser active medium.

“To address this issue three different concepts have been developed in recent decades. The first is fiber-based laser systems, the second is slab and last but not least is the thin disk, which was invented at our Institute, the IFSW.”

“The second challenge to be addressed is the limit caused by the nonlinear effects, which has mainly been addressed by mainly the development of the chirped pulsed amplification, in which you first stretch the pulses then amplify them and then recompress them to their initial pulse duration.

“Two additional approaches, which also use CPA but also allow the scaling of the average output power of laser systems, are the divided pulse amplification or the coherent beam combining.” 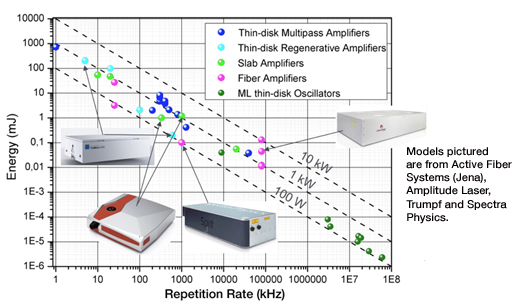 “State of the art” in commercial high power ultrafast lasers of interest.

‘State of the art’

Dr. Abdou Ahmed then reviewed the progress of higher power infrared ultrafast laser systems, over the past decade. “The highest average output power that has been achieved so far is 10.4 kW using coherent beam combining,” he said.

He then listed several developers of the high power ultrafast lasers of interest: “Nowadays you can buy 2 kilowatt laser delivering ultrashort pulses, such as from Active Fiber Systems (Jena). Amplitude Laser also provides laser systems delivering more than 350W and Trumpf and Spectra Physics more in the class of 100W average output power.”

The institute has also been working on the amplification of picosecond pulses in collaboration with Trumpf. Dr. Abdou Ahmed explained, “Using their TruMicro 5000 system, delivering more than 100W at 300 kilohertz and pulses below 7ps, we injected this laser beam into two-stage thin disk multi-pass amplifier where we could extract more than 2 kW of average output power. The beam quality factor (M2) was measured to be between 1.57 and 1.36, which is acceptable at this power level.” 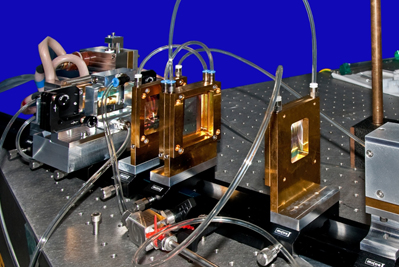 Stuttgart's IFSW is the cradle of the thin-disk laser.

Dr. Abou Ahmed’s group is also working on the amplification of femtosecond pulses, within the framework of the European-funded HIPERDIAS project, this time in collaboration with Amplitude Laser. “In this multipass amplifier, we have amplified their Tangor HP laser system delivering more than 100W of average output power and sub-500fs pulses at a 500 kHz repetition rate,” he said.

He then considered the future of ultrafast lasers. “What one can hear often is that the end user requires more flexibility so versatile ultrafast laser sources are of high interest: average output powers that range from a few watts to above a kilowatt and more; the possibility of having bursts of pulses because that can be very beneficial for materials processing; and ideally to be continuously tunable from a few hundred kilohertz to 20 MHz.”

Finally, Dr. Abdou Ahmed presented the first results from the Kilowatt Flexiburst project, with which IFSW has been closely involved.

“In this experiment we have used the Spirit 100 laser system, provided by our partner Spectra Physics, which has been boosted to more than one kilowatt of average output power at energy per pulses of one mJ and pulse duration of 340 fs.

“The beam quality factor that we achieved with this system was below 1.2, which is comparable to what you can achieve with kilowatt-class fiber lasers but better than what has been so far reported using slab laser systems.”