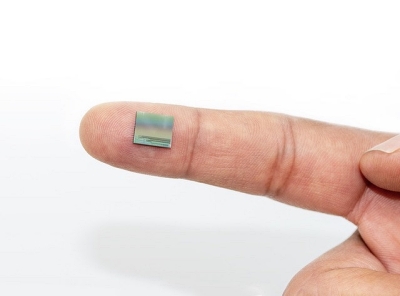 Silicon Valley lidar development company Aeva says it is now collaborating with Denso, one of the world’s largest producers of automotive components, to commercialize chip-scale lidar for self-driving vehicles.

Aeva is one of a handful of lidar developers working on optically coherent frequency modulation continuous wave (FMCW) technology. Although more complex than pulsed time-of-flight approaches, it is able to determine velocity and directional information thanks to a chirped laser and the Doppler effect.

Aeva is currently in the process of listing on the stock market via a merger with a special-purpose acquisition company (SPAC) that is expected to raise hundreds of millions of dollars in new funding - a route being taken by at least four other lidar developers.

‘Missing link’
According to Japan-headquartered Denso, which says it provides components used in virtually every new vehicle on the road, FMCW lidar will become a critical element in autonomous vehicles.

Kazuma Natsume, who heads up the firm’s autonomous driving engineering efforts, said in a release from the two firms:

“We look forward to collaborating with Aeva to further develop FMCW lidar, bring it to the mass market, and create a society free from traffic accidents.”

Denso is known to have worked closely with Toyota on lidar deployments, and previously invested in the Sandia spin-out TriLumina, which was focused on VCSEL-based lidar technology.

Meanwhile Aeva says that it is engaged with 30 of the top OEM and automotive industry players involved in ADAS or autonomous driving, and received significant investment from Porsche ahead of the SPAC listing plan. It is also working with parts giant ZF to ramp FMCW lidar to production scales.

Interference-free
The Mountain View, California, firm, which was founded in 2017 by former Apple engineers Soroush Salehian and Mina Rezk, says that its “Aeries” product offers a range of 300 meters and a wide field of view - alongside interference-free operation that is another natural benefit of the FMCW approach.

“Denso is a leader in commercializing advanced technologies at affordable costs, and our collaboration is further evidence that Aeva’s 4D lidar provides what we believe will be an unparalleled combination of superior performance and scalability,” said Salehian, now CEO.

“We’re excited to work alongside Denso to bring Aeva’s 4D lidar to global OEMs looking to implement automated driving across their vehicle programs at scale.”

During last week’s Consumer Electronics Show (CES) event, Intel’s Mobileye division said that it was planning to deploy FMCW technology developed in-house by an Intel group on commercial vehicles from around 2025. Before that happens, it will be using a more conventional lidar system from Luminar Technologies for "robotaxi" applications.