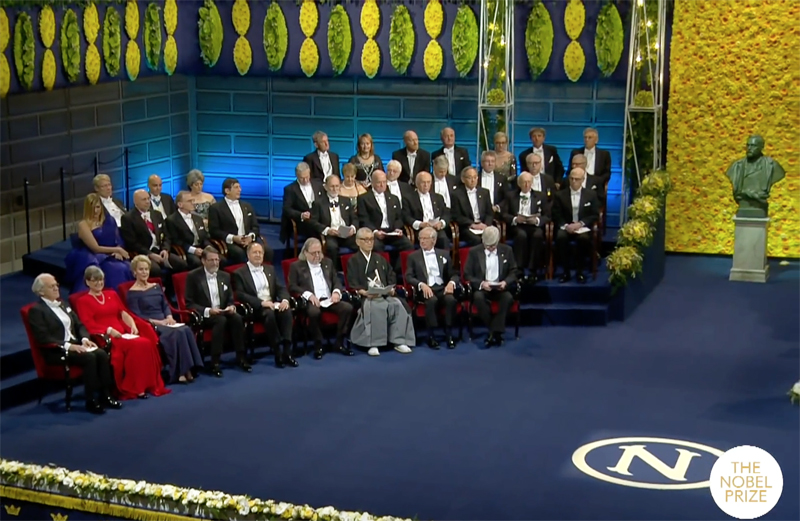 Since 1901, the Nobel Prizes have been presented in Stockholm to Nobel Laureates at ceremonies on 10 December, the anniversary of Alfred Nobel’s death.

After the excitement of the announcement in October of this year’s Nobel Prize for physics being shared between three laser scientists – Arthur Ashkin, Gérard Mourou and Donna Strickland – followed this week’s presentation ceremony in Stockholm, Sweden.

The Physics Nobel Award speech was presented by Professor Anders Irbäck, Member of the Royal Swedish Academy of Sciences and of the Nobel Committee for Physics. As is the convention, the Stockholm gathering included the King of Sweden Carl XVI Gustaf and Queen Silvia; the King later presented the laureates with their medals and citations.

Prof Irbäck told the audience, “This year’s Nobel Prize in Physics honours two inventions in laser physics that have led to groundbreaking new ways of using light. These methods have given us light-based tools with applications in medicine and other fields. 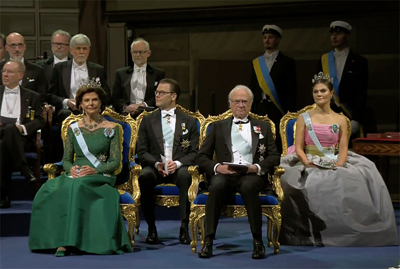 The gathering included the King of Sweden Carl XVI Gustaf and Queen Silvia.

Moving on to the second part of the physics prize, Prof Irbäck continued, “Gérard Mourou and Donna Strickland are being rewarded for an invention called chirped pulse amplification. This is a method for creating extremely intense, short pulses of laser light. Efforts to create more intense laser pulses had been under way since the first laser was built in 1960.

”But by the mid-1980s these experiments had reached an impasse, since the intensity of the laser light destroyed the amplifying material itself. Using their CPA technique, Mourou and Strickland were able to get around this limitation. This method changed the landscape of research about high-intensity lasers, from something that had been carried out in a few large laboratories to something that could be done in many places around the world, leading to a powerful surge in development work. 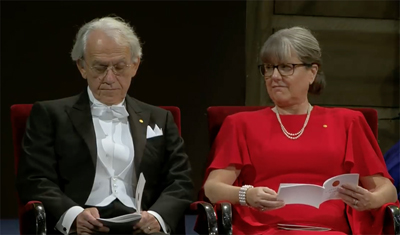 ”The pursuit of shorter and shorter pulses has enabled researchers to move closer to the attosecond level. This opens the way for studying the movements of electrons in atoms and molecules. Numerous applications of laser pulses are made possible by the CPA technique. One example is eye surgery for correcting near-sightedness, in which laser pulses serve as ultra-precision surgical tools.”

Prof Irbäck concluded by saying, “Dr Ashkin, Professor Mourou, Professor Strickland, you have been awarded the 2018 Nobel Prize in Physics for your ground-breaking inventions in the field of laser physics. On behalf of the Royal Swedish Academy of Sciences it is my honour and great pleasure to convey to you our warmest congratulations. I now ask you to step forward to receive your Nobel Prizes from the hands of His Majesty the King.”

The three 2018 laureates will share the SEK 9 million ($1 million) monetary prize between them, with half going to Ashkin, and Mourou and Strickland each receiving a quarter-share.

This year’s award follows last year’s recognition of the laser interferometric detection of gravitational waves, while in 2014 the prize went to three inventors of blue LEDs and laser diodes. Also in 2014, the Nobel chemistry prize was awarded to three pioneers in super-resolution microscopy, using lasers and photonics techniques.