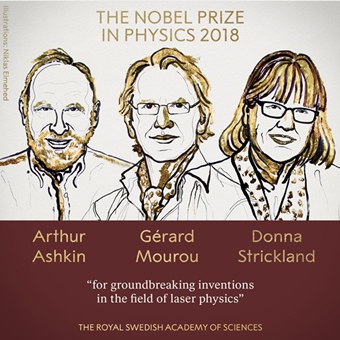 A trio of laser physicists have won shares of the 2018 Nobel Prize in Physics, with photonics-related work recognized for the second successive year.

The Nobel committee awarded half of this year’s prize to Arthur Ashkin, who pioneered the early development of optical tweezers while at Bell Laboratories. The other half of the prize is shared by Gérard Mourou and his former PhD student Donna Strickland, who invented the chirped-pulse amplification (CPA) technique for producing high-energy, ultrashort laser pulses while at the University of Rochester in the 1980s.

PhD to Nobel prize
Appearing by phone at a Nobel press conference shortly after hearing she had won, Strickland - now at the University of Waterloo in Canada - expressed her surprise at being only the third woman to win the prize, after Marie Curie in 1903 and Maria Goeppert Mayer in 1963.

"I thought there might have been more," she said. "Obviously we need to celebrate all women physicists, because we’re out there, and hopefully this will move forward at a faster rate. I’m honored to be one of those women."

The past Optical Society (OSA) president also recalled the time of her PhD studies, at Rochester’s influential Laboratory for Laser Energetics, when she and Mourou came up with the CPA scheme. Strickland noted that while other research groups had focused on amplifying short pulses directly, her and Mourou had thought “outside the box” by first stretching the laser pulse - before the amplification stage.

A 1985 paper published by the pair noted that this approach, previously used in radar technology, would be applicable to any short laser pulse. Their initial demonstration used a Spectra-Physics Nd:YAG laser emitting 150 picosecond pulses at a wavelength of 1.06 µm.

After stretching these in a kilometer-long optical fiber provided by Corning, they could be compressed back to just 2 picoseconds in duration while still delivering millijoules of energy.

That breakthrough effectively enabled access to the femtosecond (and subsequently attosecond) pulse regimes, with the technique now used widely in laser micromachining of glass and in eye surgery to correct vision defects, primarily short-sightedness. 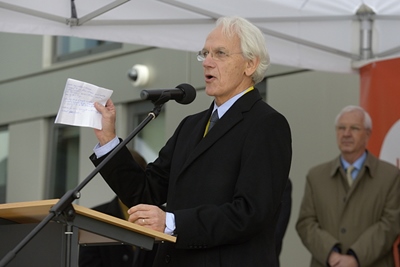 Among the many giant laser facilities to take advantage of CPA are the three Extreme Light Infrastructure (ELI) sites in eastern Europe built with hundreds of millions of euros in funding provided via the European Union’s regional investment fund. Mourou has himself been closely involved in the design and construction of the ELI facilities, of which the first - ELI Beamlines in Prague - is now conducting initial experiments.

After the CPA development with Strickland in Rochester, Mourou became founding director of the Center for Ultrafast Optical Science (CUOS) in Michigan – an institution that has proved highly influential in the field, and currently houses the 300 terawatt-pulsed HERCULES laser, based on the CPA technique.

Mourou remains an emeritus professor at CUOS today, and holds a similar position at École Polytechnique in Palaiseau, France.

Tweezing cells
96-year-old Ashkin was the first scientist to realize that the radiation pressure of light could be used to hold and manipulate particles, including individual viruses, bacteria, and cells. In perhaps his most famous experiment, Ashkin collaborated with 1997 physics Nobel laureate Steve Chu and others to cool and trap individual atoms using only light.

Officially, Arthur Ashkin retired from Bell Labs in 1992, but he is said to remain active in his home laboratory, apparently furnished with some of the same equipment he used during his long career. When called by the Nobel committee to be told of the 2018 award, he is said to have responded by saying that he was currently very busy writing up his latest scientific paper.

The three 2018 laureates will share the SEK 9 million monetary prize between them, with half going to Ashkin, and Mourou and Strickland each receiving a quarter-share.

This year’s award follows last year’s recognition of the laser interferometric detection of gravitational waves, while in 2014 the prize went to three inventors of blue LEDs and laser diodes. Also in 2014, the Nobel chemistry prize was awarded to three pioneers in super-resolution microscopy, using lasers and photonics techniques.

SPIE video: Gérard Mourou on the development of CPA: