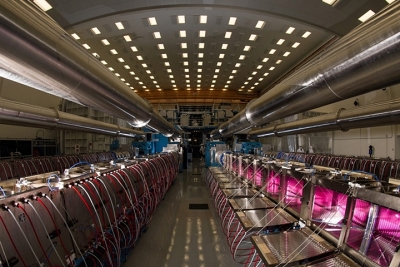 The University of Rochester's Laboratory for Laser Energetics (LLE) - home to the mighty Omega laser and a key location for optics and photonics research for more than 50 years - has secured $82 million in federal support.

The latest funding for the laboratory comes as part of wider $575 million package for the US National Nuclear Security Administration’s (NNSA’s) Inertial Confinement Fusion (ICF) program.

Primarily intended to help maintain the US’ nuclear weapons stockpile, the money also supports ongoing research into ICF that might one day result in fusion-based power stations.

Bipartisan package
In a release announcing the award, which is contained within a bipartisan appropriations package, local New York senators Kirsten Gillibrand and Chuck Schumer wrote:

“The funding will help achieve scientific milestones laid out in the current five-year Cooperative Agreement between LLE and the NNSA, and will provide resources to help support the science-based stewardship of the nation’s nuclear weapon stockpile.

University of Rochester president Sarah Mangelsdorf added: “With this federal support, LLE will continue to make critical contributions to the science-based Stockpile Stewardship Program, and build on its 50-year history of transformational leadership in laser innovation.”

The latest funding follows awards of $80 million last year, and $75 million for 2018. In 2018, the future of LLE appeared to be in jeopardy when the Trump administration’s FY2019 budget request threatened a major funding cut and a “three-year ramp down” of the site.

However, in the end, support was allocated via another bipartisan appropriations bill mainly focused on energy and water supplies.

“The inclusion of $82 million in funding for the Omega Laser Facility will ensure that the nearly 900 workers employed thanks to the Rochester Laser Lab can stay on the job keeping our nuclear weapon stockpile safe and reliable while pushing the frontiers of energy research at a time when countries like China and Russia are working to beat the US to new technological advances,” said Schumer in the senators' announcement.

“I’m such a staunch supporter of the University of Rochester Laser Lab because it plays a paramount role in our national security and is vital to our regional economy, employing hundreds of scientists and bringing millions into the Rochester area."

Petawatt beam power
Established back in 1970, LLE has been instrumental to the development of the cluster of optics and photonics companies to be found in the Rochester area, alongside historically important companies like Xerox, Bausch & Lomb, and Eastman Kodak.

The Omega laser system comprises 60 beams that can together deliver 30 kJ of optical energy to a tiny target in less than a nanosecond, making it one of the most powerful laser systems in the world.

Completed in 2008, the “EP” (extended performance) Omega system features four frequency-tripled, kilojoule-class beamlines that are independently configurable and offer intensities on the scale of the National Ignition Facility (NIF) system in California.

Two of those beamlines can be compressed for short pulse, petawatt-class operation, says LLE. Although a full-system shot cycle takes approximately 90 minutes, meaning that only 7 to 8 shots are possible each day, an interleaved beam operation on a 45-minute shot cycle can double that total.