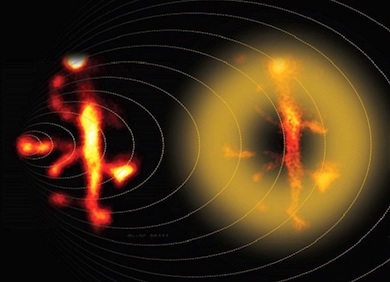 Developed by the University of Bordeaux Interdisciplinary Institute for Neuroscience (IINS) and published in Neurophotonics, the procedure provides a way to improve the spatial resolution of stimulated-emission depletion (STED) microscopy inside relatively thick samples.

This could readily assist the imaging of neural structures in ex vivo samples of brain tissue, but the Bordeaux group believes that its method will also help a move towards super-resolution STED microscopy of more complex living systems.

STED, the super-resolution technique for which Stefan Hell shared the 2014 Nobel prize for chemistry, adds an additional quenching laser pulse to conventional fluorescence excitation, delivered in a ring-shaped profile. Resolution of detected fluorescence at the central hole of this pulse can be driven down below the diffraction limit under certain conditions.

Challenges in STED include optical aberrations arising from both the optics and the specimen, creating distortions on the laser wavefront that can degrade the quality of the STED point-spread-function, noted by the Bordeaux team to be a critical parameter.

Adaptive optics (AO) has been investigated as a possible solution, although most AO implementations have to date been iterative techniques assessing the wavefront distortions in a closed loop, which requires the fragile tissue sample to experience longer laser exposure times than may be desirable to allow the AO to do its work.

An approach which effectively requires less adaptive accommodation time would allow the exposure time to be reduced. This could potentially improve the performance of the imaging operation on tissues which suffer from rapid photobleaching.

The Bordeaux team's solution is to use an a priori estimation of spherical aberrations as a function of imaging depth in a model system. That estimation could then be used to initially shape the laser wavefront used on a tissue sample from the start of the illumination cycle.

"We measured the aberrations as a function of depth in an agarose gel containing gold and fluorescent beads and with a refractive index closely adjusted to the one of living brain tissue," noted the project in its published paper. "We then show that these calibrated values can be used to pre-program a spatial light modulator at specified depths to correct the aberrations and to improve image quality, facilitating the depth penetration for nanoscale imaging of neuronal morphology."

In trials, the project compared the results of regular STED microscopy and its new corrected STED procedure, and found that its calculated calibration could be translated into the more complex environment of a living biological sample without any further iterations. The corrected STED images captured the fine details of deeper neural dendrites much better than standard STED images, said the project.

"Using our calibration strategy, we could measure neuronal structures as small as 80 nanometers at a depth of 90 microns inside biological tissue and obtain a 60 percent signal increase after correction for spherical aberration," commented Bordeaux's Valentin Nägerl.

The team believes that its novel calibration process is robust, straightforward to implement, and relatively inexpensive, offering an effective route to obtaining better results with STED microscopes, as long as the prepared phantom sample matches the optical properties of the biological specimen.

"Our approach is not limited to brain samples," said Nägerl. "It could be adapted to other tissues with known and relatively homogeneous refractive indices, as well as other types of preparations, even potentially in the intact, live mouse brain."