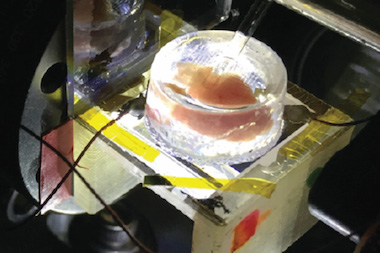 Measurements of the electrical activity associated with cells and tissues can provide valuable information for studies in neuroscience or pharmacology.

The scale of these bioelectric signals varies widely, however, posing a challenge to any attempt at measuring the parameters across network-scale biological systems.

A project between the University of California, Berkeley and Stanford University has now developed a device able to image the real-time electrical activity of a beating animal heart, based around a graphene sensor. The work was reported in Nano Letters.

"The ease with which we can image an entire region of a sample could be especially useful in the study of neural networks that have all sorts of cell types involved," said Stanford's Allister McGuire.

"If you have a fluorescently labeled cell system, you might only be targeting a certain type of neuron. Our system would allow you to capture electrical activity in all neurons and their support cells with very high integrity, which could really impact the way that people do these network level studies."

The project's sensor is termed a critically coupled waveguide-amplified graphene electric field (CAGE) device. Graphene's optoelectronic properties include a sensitivity to electric fields, which affect its otherwise near-constant absorption of light across visible and IR frequencies. Using an applied voltage as a gate can therefore directly alter the optical properties of the material.

UC Berkeley previously reported the principle of combining the unique gate-variable optical transitions of graphene with a critically coupled planar waveguide platform, a coupling architecture in which all the optical power injected in the waveguide is ideally dissipated by the resonator through multiple internal reflection cycles, effectively amplifying the emerging signal.

This design proved capable of highly sensitive detection of local electric fields with a voltage sensitivity of a few microvolts, a spatial resolution of tens of microns and a frequency response over tens of kilohertz, potentially opening a route to parallel detection of electric fields over a large field of view.

The new findings now show that this design principle can successfully be applied to the imaging of intact biological systems, and suggest that lab-on-a-chip devices engineered to analyze bioelectric phenomena are possible.

The project tested its sensor using a live heart from a chicken embryo, extracted from a fertilized egg and placed on a graphene sheet laid over a waveguide.

"We use the CAGE sensor to detect native electrical activity from cardiac action potentials with tens-of-microns resolution, and simultaneously map the propagation of these potentials at tissue-scale," noted the project in its published paper.

In addition to the study of cardiac cells, the project anticipates that its sensor could help to test the effect of drug candidates on heart muscle before these drugs go into clinical trials, for example to determine whether they induce unwanted arrhythmia.

As a test, the team observed the beating chicken heart with CAGE and an optical microscope while infusing it with the drug blebbistatin, that inhibits the muscle protein myosin. They observed the heart stop beating, but CAGE showed that the electrical signals were unaffected.

Another application could be in studies of the brain, placing graphene strips directly on the surface of the brain to continuously measure electrical activity rather than just measure at discrete points as current electrode arrays do.

"Electric fields mediate chemical interactions, mediate biophysical interactions - all sorts of processes in the natural world - but we never measure them," said Halleh Balch of UC Berkeley. "The ability to actually image electric fields gives you a look at a modality that you previously had little insight into."