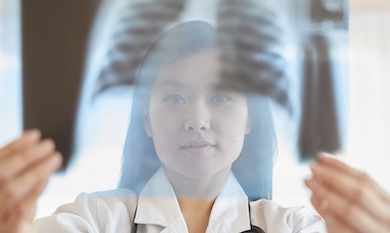 The deal will see Mauna Kea participate in a new prospective multi-center clinical feasibility study, to be led by the Johnson & Johnson Lung Cancer Initiative (LCI), supported by funding from LCI of €978,000.

In return, LCI will claim the right of first refusal in connection with any deal for Mauna Kea's needle-based confocal laser endomicroscopy (nCLE) platform for subsequent lung-based procedures that develop from the trial.

"We are pleased to announce this important clinical study and expanded agreement as part of our collaboration with the Lung Cancer Initiative at Johnson & Johnson," said Mauna Kea CEO Robert Gershon.

The Cellvizio platform involves a small confocal laser microscope incorporated into an endoscope, allowing in vivo imaging of pre-cancerous lesions. First unveiled by Mauna Kea nearly two decades ago and receiving initial FDA and CE mark approval for its probe-based pCLE version in 2005, momentum behind Cellvizio's ability to identify early-stage malignancies has increased since completion of a set of clinical trials in 2011.

Mauna Kea has positioned Cellvizio to take advantage of the increasing appeal of optical biopsies in a number of clinical settings, initially for investigations of the GI and urinary tracts. Cellvizio subsequently proved promising for imaging and diagnosis of lung cancers and pancreatic lesions. In 2018 Cellvizio played a part in the identification of tissue structures potentially important in cancer metastasis and described as "a newly recognized human organ."

Despite the clinical promise of Cellvizio, Mauna Kea has faced difficulties turning a profit from its platform. After posting multi-million-dollar losses for several years, Mauna Kea received a €7.5 million investment from the venture wing of Johnson & Johnson in December 2019, in return for J&J taking a 17.5 percent equity stake. The deal was described by Gershon as a "significant strategic inflection point" for the company.

Johnson & Johnson's Lung Cancer Initiative, created in 2018, is intended to coordinate efforts across the company's consumer, diagnostic, medical device and pharmaceutical businesses. LCI's efforts include creation of a pre-cancer genome atlas, mapping the cellular changes involved in the progression of pre-neoplastic lesions to invasive lung cancer.

The company remains at the center of legal action launched by patients with lung cancer who believe that talcum powder products led to them contracting the disease or other forms of cancer. Johnson & Johnson maintains that its talc is safe and asbestos-free. In February 2021 it was reported that J&J was preparing a $3.9 billion settlement.

Mauna Kea's most recent full-year financial figures for calendar 2020 indicated a net loss of €12.8 million, an improvement over the €15.3 million loss posted the previous year. CEO Gershon said in April 2021 that global recovery of medical caseloads from pandemic-enforced lows would assist take-up of the Cellvizo system, as the company focused on gastrointestinal applications.

"We remain confident that our commercial strategy is well founded," he told analysts at the time."Results in recent quarters continue to reflect that our new targeting strategy in the US GI market focused on high-volume upper GI clinicians is working."