Study on 22 patients with the disease shows that real-time diagnostic and staging approach is 'feasible and safe'. 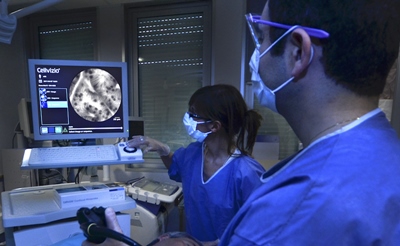 A small-scale clinical trial has demonstrated that a laser-based optical biopsy system is able to identify lung cancer in real time, suggesting a potential future role for the technology in diagnosing and staging the disease.

Jouke Annema, the University of Amsterdam professor and Mauna Kea collaborator who led the study, concluded in a paper published in the European Respiratory Journal that real-time lung cancer detection using the ultrasound-guided Cellvizio was “feasible” and “safe”, providing accurate recognition of lung cancer characteristics.

Difficult to access
The world’s leading cause of cancer deaths, most - though by no means all - linked to smoking, lung cancer is believed to kill in the region of 400 American citizens every day. However, suspicious lesions found using conventional screening methods tend to be very difficult to access and biopsy – compromising the early diagnosis and intervention needed to reduce death rates.

Mauna Kea is hoping that its optical biopsy alternative could provide a solution. The technology is already well established, but has so far been used mostly in gastrointestinal (GI) tract applications. Still a small company, Mauna Kea has struggled to grow its business profitably and is investigating the potential of pulmonary (i.e. lung) applications as its second target area, beyond GI.

“The use of needle-based endomicroscopic imaging provides accurate results on the nature of pulmonary lesions and metastatic lymph nodes,” said Annema, a professor of pulmonary endoscopy, in a statement released by Mauna Kea.

“In this well designed clinical pilot study, we have shown that nCLE [needle-based CLE] enables an 89 per cent accuracy for detecting malignancy in lung tumors and metastatic lymph nodes with substantial intra- and inter-observer agreements.

“These promising results support the fact that nCLE might qualify as an important adjunct to navigation bronchoscopy for real-time targeting and identification of lung tumors.”

In the study, results from the optical biopsy approach were compared with conventional cytology analysis, with the suspect cells collected using fine needle aspirations.

Tumors and lymph nodes
The clinical team looked at 27 different lesions in the 22 patients, including six tumors and 21 lymph nodes in the chest area. Accuracy of nCLE imaging for detecting malignancy in tumors and metastatic lymph nodes was 90 per cent and 89 per cent respectively, with strong agreement between different observers.

Mauna Kea’s CEO Robert Gerson said in response to those findings: “This is an important publication that further supports new market opportunity within interventional pulmonology.

“It provides evidence that the use of our needle-based endomicroscopy platform is opening a new era in interventional pulmonology, paving the way toward more precise guidance to identify the optimal area for sampling and as a real-time feedback technique for diagnostic, staging and treatment procedures in lung tumors.”

Cellvizio is also said to be the first commercial endomicroscopy device that can be integrated within robot-assisted bronchoscopy platforms.

“One of our three strategic priorities for 2019 is evaluating the interventional pulmonology market as Mauna Kea’s next commercial focus-area,” added Gershon, who took over as CEO last October, replacing company founder Sacha Loiseau.

Publication of the journal paper came shortly after Mauna Kea revealed an increase in revenue for the first quarter of 2019. At €1.7 million, its sales were up 65 per cent on the prior year – although that coincided with a dip in revenues while the company adjusted its commercial strategy.

“We are off to a good start in 2019, but we remain in the early stages of executing our long-term growth strategy,” Gershon said, revealing sharp increases in consumables sales on a pay-per-use basis.

Market opportunity
Despite that positivity, Mauna Kea has tended to burn through cash quickly in the past – not an unusual outcome for a small company in the medical sector, where achieving regulatory clearance with new technologies can be a particularly costly challenge.

Gershon has said previously that he believes the Cellvizio platform is well positioned to disrupt, and even redefine the current standard of care for GI tract biopsies. In the US alone, nearly 4 million upper GI tract procedures are carried out each year.

While several different applications are under investigation for Mauna Kea’s next commercial focus area, a version of Cellvizio designed for use with existing bronchoscopes received 510(k) clearance from the US Food & Drug Administration (FDA) in February – suggesting that lung intervention is a likely target, especially as the company recently terminated a partnership with Cook Medical focused on urology.

“With more than 240,000 annual lung biopsy procedures in the US alone, interventional pulmonology represents a compelling market opportunity for Mauna Kea’s next clinical indication for commercial focus,” Gershon told investors in March.

“We are excited to have begun the formal evaluation process and believe that our AQ-Flex is paving the way toward more precise guidance to identify the optimal area for sampling, and potentially as a real-time feedback technique for diagnostic, staging and treatment procedures for lung lesions,” added the CEO.

“If successful, we believe this could be an incredibly exciting commercial opportunity that will drive growth for the company in the years to come.”