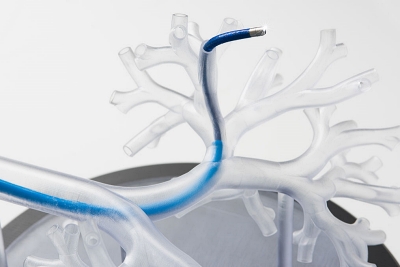 An optical diagnostic probe developed by French firm Mauna Kea Technologies is about to begin a new clinical trial to further test its effectiveness for diagnosing lung cancer.

The Paris-headquartered company said that the pilot study, part of its collaboration with the Lung Cancer Initiative set up by global medical technology giant - and Mauna Kea investor - Johnson & Johnson, will test needle-based confocal laser endomicroscopy (nCLE) approach on 25 patients in the US and the Netherlands.

The patients involved in the trial all have peripheral lung nodules, and are scheduled to undergo a robotic bronchoscopy procedure. During the bronchoscopy, images of nodule cells will be captured using the Cellvizio 100 Series confocal laser Imaging system.

Diagnostic resolution
While Cellvizio has shown its utility in a number of other diagnostic applications, including central lung cancers, the needle-based probe has not previously been used in conjunction with robotic navigational bronchoscopy.

According to the project summary, nCLE uses a small fiber passed through a biopsy needle to enable real-time microscopic imaging of cells. “With resolution of 3.5 µm it is possible to identify key features consistent with malignancy and pulmonary fibrosis,” states the summary.

The effectiveness of nCLE with intravenous fluorescein has previously been shown for central lung cancers, with physicians using ultrasound to guide needle placement.

In this latest study, the endomicroscopy kit is being evaluated alongside a new robotic system called Monarch, which has been developed by the Johnson & Johnson subsidiary Auris Health.

Christopher Manley, who is heading up the study from the Fox Chase Cancer Center in Philadelphia, said in a statement from Mauna Kea:

“I am truly excited to start this feasibility study and offer two technological breakthroughs to my patients to improve the diagnosis of peripheral lung nodules.

“The Monarch platform is transforming the way we navigate towards peripheral pulmonary lesions, while nCLE enables the characterization at microscopic level, in vivo, and in real time inside of these lesions, located outside of the airways, through a needle.”

Real-time imaging
Jouke Annema, who is leading the pilot study at the Amsterdam University Medical Center, pointed out a recent study by the Amsterdam group that showed nCLE yielded 90 per cent accuracy for characterizing malignancy in both lung tumors and lymph nodes to which the disease had spread.

Published in the European Respiratory Journal, that work concluded that the nCLE system could detect lung cancer in real time, with good agreement between different observers using the probe.

“The combination of nCLE with robotic navigation bronchoscopy could enable real-time targeting and identification in a much larger proportion of lung tumors than with conventional bronchoscopy techniques, and could significantly increase confidence in the adequacy of biopsy sampling,” Annema added.

“This study is an important step in reaching the desired future state of transitioning the patient care pathway to diagnose and treat in one setting of care.”

The study is scheduled for primary completion within a year, with the main outcome under test being the ability to obtain good-quality nCLE images of lung nodules and surrounding tissue in more than 80 per cent of patients tested.

Mauna Kea’s CEO Robert Gershon said: “This new study with the Cellvizio and the Monarch platforms is designed to demonstrate the feasibility and safety, as well as the unique capability to visualize lung lesions outside the airways, where 85 per cent of lesions reside.”

Johnson & Johnson and lung cancer
In December 2019, Johnson & Johnson Innovation acquired a 17.5 per cent equity stake in Mauna Kea Technologies, after it invested €7.5 million in the Paris-listed firm.

Auris Health represented a much larger acquisition - in April 2019 the healthcare giant’s Ethicon subsidiary paid $3.4 billion in cash to complete that deal.

Johnson & Johnson continues to face numerous lawsuits launched by patients with lung cancer. They believe that the company's talcum powder products contained asbestos, and that this led to them contracting the disease, or other forms of cancer.

However, Johnson & Johnson has maintained that its talc is safe and asbestos-free, and is appealing against recent high-profile verdicts that have gone against it.