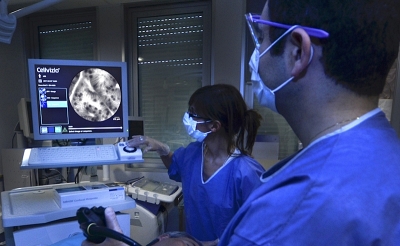 At €1.40 per share, it sees the healthcare firm's venture wing take a 17.5 per cent equity stake in Mauna Kea. News of the deal, which values Mauna Kea at around €40 million, saw the stock price of the Paris-listed company jump by around 40 per cent on December 16.

As well as boosting the French firm’s balance sheet, the investment is intended to help extend an existing collaboration with Johnson & Johnson’s Lung Cancer Initiative.

Cash boost
In 2018 Mauna Kea posted sales of €6.8 million but it has been consistently loss-making in recent years, and the company's net loss figure widened to €12.8 million last year.

The losses have continued this year, with Mauna Kea’s cash reserves shrinking from €8.6 million at the start of 2018 to around €4 million by the end of October.

Company CEO Robert Gershon welcomed the investment, describing it as a “significant strategic inflection point” for the company that would support its growth initiatives.

Thus far, Mauna Kea’s “Cellvizio” confocal laser endoscopy technology has primarily been used to diagnose tumors in the gastrointestinal tract. However, a major new application area being investigated by the company is pulmonology.

Earlier this year results from an early-stage clinical trial on 22 patients with lung cancer suggested that tumor detection with ultrasound-guided Cellvizio was “feasible and safe”.

Back in March this year, Gershon had told investors that interventional pulmonology represented a “compelling market opportunity” for the company, pointing to the more than 240,000 lung biopsy procedures that take place every year in the US alone.

Pulmonology target
Following the latest investment the CEO added: “This strategic investment will advance our collaboration with the Lung Cancer Initiative at Johnson & Johnson, which is working to develop new diagnostic and therapeutic approaches for this disease with significant unmet need.”

Cellvizio has also been configured for use through existing bronchoscopes, transbronchial needles and other bronchoscopic accessories, which is said to make it a viable option for use with emerging robotic approaches.

Johnson & Johnson is still facing numerous lawsuits launched by patients with lung cancer. They believe that the company's talcum powder products contained asbestos, and that this led to them contracting the disease, or other forms of cancer.

However, Johnson & Johnson has maintained that its talc is safe and asbestos-free, and is appealing against recent high-profile verdicts that have gone against it.