Mauna Kea platform shows anatomical structures that may be important in cancer metastasis. 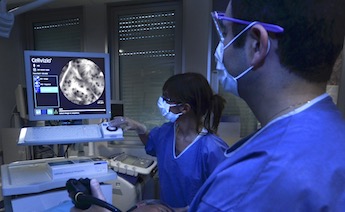 A US clinical team using a probe-based confocal laser endomicroscopy (pCLE) technique has determined that certain layers of the human body previously thought to be dense, connective tissues are actually interconnected, fluid-filled compartments, and categorized this part of the body as an organ.

The study, published in Scientific Reports, could lead to a better understanding of cancer metastasis and inflammatory conditions, along with improved methods of treatment.

A Cellvizio pCLE platform from Mauna Kea Technologies was used by the team to generate in vivo histological images of the extrahepatic bile duct adjacent to the liver, during pancreato-biliary surgeries on twelve patients. Samples were then resected and immediately rescanned using pCLE ex vivo for comparison with conventional fluorescence microscopy, to confirm the findings.

The pCLE images identified a fluid-filled interstitial space located in the submucosa that had not been previously reported using standard histological techniques. Subsequent investigations of other submucosal tissues in the gastrointestinal tract, bladder, skin and lung revealed similar structures, leading the team to conclude that this tissue was a previously unreported human organ, which they have termed the interstitium.

"We initially conducted a study using real-time Cellvizio to identify the precise tissues we were imaging in the bile duct of patients," said David Carr-Locke of the Weill Cornell Medical College and New York Presbyterian Hospital. "As our work evolved, we were astounded to discover a microanatomical network of interconnected spaces, filled with fluid and lined by collagen with a unique arrangement, that had not been realized before and that appears to be present throughout the body."

Imaging the interstitium in living tissue
Confocal laser endomicroscopy is based upon illuminating a tissue with a low-power laser focused at a specific tissue depth, and then detecting fluorescent light reflected from that plane, while scattered light from above and below the plane of interest is ignored. Probe-based CLE systems apply this principle via a fiber-optic bundle and integrated lens, enabling the probe to he placed through the biopsy channel of a conventional endoscope.

Mauna Kea has targeted Cellvizio at optical biopsy procedures, whereby tissue samples can be diagnosed without the need for removing and analyzing sections of tissue via ex vivo histology in the traditional manner. The company says it has identified opportunities for pCLE technology to have significant impact in the diagnosis of inflammatory bowel disease, pancreatic cysts, and disorders of the esophagus, among other conditions.

The company's most recent FDA approval, granted in December 2017, related specifically to the technology’s ability to image the internal microstructure of tissues, as a means to identify cells and vessels and reveal their organization. At the time Mauna Kea described the approval as enabling a formal shift for the company from an imaging role to an identification function.

David Carr-Locke told Optics.org that in his view pCLE was essentially the only technology likely to be able to image the interstitium in living tissue, first in the bile duct but also in other sites where the appropriate focal length can be imaged, since it can scan the tissue in vivo while preserving its architecture, in this case the crucial fluid spaces.

"I have used pCLE since it was first available in 2004, and the appearance of a reticular pattern of thin dark bands with white spaces in the images of the bile duct stood out as different from all other GI tract appearances," he commented.

"This lead to our questioning what structures were actually being 'seen' by this technology. We now know that the pCLE probe we used, with a focal plane of 60 microns, was imaging the subepithelial space in the bile duct, since this tissue has an epithelium only one cell thick. Once we knew what to look for in other tissues and at what depth, we found the same network of collagen elsewhere."