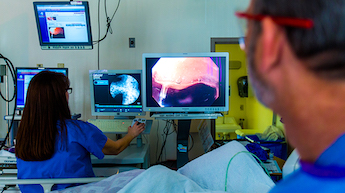 Mauna Kea, the Paris-based developer of Cellvizio laser endomicroscopy platforms, has announced the results of two clinical studies into the use of its technology for diagnosis and management of cystic pancreatic lesions (CPL).

Results of the studies published in three journals are a further development of Mauna Kea's intention to use Cellvizio for detection of pancreatic cysts, which has already included a 2017 clinical trial on the topic.

At that time, the company indicated that treatment of pancreatic cysts was one area where the Cellvizio approach and its optical biopsy capability could be valuable, since the differentiation between cysts of different kinds was challenging for clinicians.

According to Mauna Kea, diagnosis of CPLs currently relies upon measurement of carcinoembryonic antigen in the cyst fluid and cytology, which can be subjective or difficult to interpret, with more than 50 percent of cysts missing cytologic confirmation.

Cellvizio is a needle-based confocal laser endomicroscopy (nCLE) platform, in which a CLE miniprobe is passed through a surgical needle to reach the target tissues, as opposed to a probe-based technique with the probe entering through the accessory channel of an endoscope.

Since its initial development in 2011, the Cellvizio nCLE technology has been positioned by Mauna Kea as a way to spot early signs of cancers in the esophagus, pancreas, and urinary tract. It also offers a route to optical biopsy methods, allowing surgeons to assess the condition of tissues and the key differences in vascular networks used to guide treatment options without needing to excise samples and await examination.

The two latest trials consisted of an INDEX study, comparing in vivo and ex vivo diagnosis of CPL in 50 participants to assess nCLE against surgical histopathology; and a sponsored CONTACT interventional study of 330 participants to evaluate using nCLE as a means to assess pancreatic cysts, lymph nodes near the gastrointestinal tract, and pancreatic masses.

"These recent publications demonstrate the very high diagnostic yield of nCLE, 84 to 91 percent, while validating accuracies for the differentiation of mucinous versus non-mucinous PCLs - 97 percent in both studies," commented the company.

Opportunities in pulmonology as losses continue

Mauna Kea has struggled to convert the clinical promise of Cellvizio into a robust revenue stream, and has made several adjustments to its business model while searching for the best path to follow. In September 2018 it began focusing on pay-per-use agreements for its optical biopsy systems in the US, to counter what the company admitted was a limited sales presence in the territory.

Half-year financial results released in September 2019 showed that total Cellvizio shipments increased 67 percent year-on-year, with a 71 percent rise in shipments of the consumable probes used by the platform and which represent a significant aspect of the Cellvizio business.

However the company's overall loses continued to grow, reaching €8.1 million for the first half of 2019, compared to a €6.8 million loss in the same period of the previous year.

Speaking to analysts, CEO Robert Gershon indicated that the company saw interventional pulmonology and the use of Cellvizio for evaluation of the respiratory tract as being the next focus of the company's commercial efforts, and a significant potential market.

"Interventional pulmonology has clearly emerged as the frontrunner and the market that we have commented on publicly," he said. "We are encouraged by the work we have done thus far in validating the potential market opportunity, the fact that we have cleared technology for lung nodule characterization, and that there is strong interest from key constituents to understand how the Cellvizio AQ-Flex 19 confocal miniprobe may improve patient outcomes."