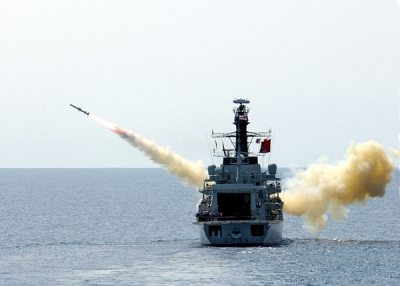 The UK’s Ministry of Defence (MOD) has awarded three contracts to deploy directed energy weapons - including two high-power lasers and one radio-frequency system - with the British Army and the Royal Navy.

Worth a total of £72.5 million, the four-year contracts will be completed by consortia led by global defense giants Thales and Raytheon.

Meanwhile a “Wolfhound” armoured vehicle will host a laser demonstrator that will investigate capability against UAVs and other airborne threats for the British Army.

The RF weapon demonstrator will also be used by the British Army, hosted on a “MAN SV” truck to detect and track a variety of air, land and sea targets.

The announcement comes two years after the MOD said that it planned to spend “up to” £130 million on the development of three three directed energy weapons, with a view to initial deployment in 2023.

“We’re going to be pioneering the sort of beyond-next-generation technology which can alter the face of conflict. So, to mark the opening of this festival of science, innovation and industry, I am delighted to today announce that we have awarded three contracts to UK firms to produce and trial advanced laser weapons.

“These directed energy weapons, which operate without ammunition, could make a vital [contribution] to future national security. In the meantime, these contracts are also sustaining more than 250 skilled jobs.”

The contracts are part of a £6.6 billion spending package aimed at research and development efforts by the MOD.

The MOD said that the novel weapons technology will be integrated onto the Royal Navy and British Army platforms for user experimentation from 2023 to 2025.

“The experimentation will focus on operation and maintenance of these new systems, and will provide invaluable knowledge, information and experience to assess whether directed energy weapons can be fully embedded on other defence assets in the future,” it added.

Dragonfire to Hersa
Shimon Fhima, the MOD’s Director of Strategic Programmes, said that the newly formed “Team Hersa” would manage the delivery of the demonstrators, and prepare forces for the introduction of the new weapons systems.

“These technologies have the potential to revolutionise the future battlefield for our armed forces, enabling the prosecution of new targets in the land, sea and air domains and allowing commanders to meet mission objectives in new ways,” Fhima added.

“We must exploit at pace the cutting-edge technologies developed by the talented scientists and engineers across the UK to capitalise on its benefit.”

Back in 2017, the MOD awarded a £30 million contract for laser weapon development to a consortium led by missile firm MBDA Systems.

Known as the “Dragonfire” project, it also featured Leonardo, Qinetiq, procurement specialist Arke, and Marshall ADG - and does not appear to feature in the newly announced trials.

At the time, it was believed that the MBDA-led effort had been chosen ahead of bids from rival consortia led by Thales and Raytheon, among others.