VLT sheds light on planets around nearby star, L 98-59, similar to our Solar System. 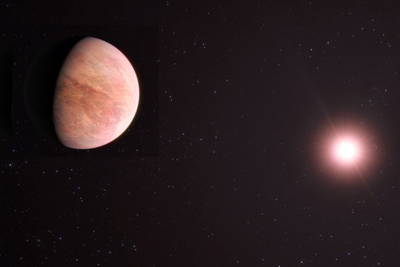 A team of astronomers have used the European Southern Observatory’s Very Large Telescope (ESO’s VLT) in Chile to shed new light on planets around a nearby star, L 98-59, that resemble those in the inner Solar System.

Amongst the findings are a planet with half the mass of Venus — the lightest exoplanet ever to be measured using the radial velocity technique — an ocean world, and a possible planet in the habitable zone.

"The planet in the habitable zone may have an atmosphere that could protect and support life,” commented María Rosa Zapatero Osorio, an astronomer at the Centre for Astrobiology in Madrid, Spain, and one of the authors of the study published in Astronomy & Astrophysics.

The results are an important step in the quest to find life on Earth-sized planets outside the Solar System. The detection of biosignatures on an exoplanet depends on the ability to study its atmosphere, but current telescopes are not large enough to achieve the resolution needed to do this for small, rocky planets.

The newly studied planetary system, called L 98-59 after its star, is an attractive target for future observations of exoplanet atmospheres. Its orbits a star only 35 light-years away and has now been found to host rocky planets, like Earth or Venus, which are close enough to the star to be warm.

With the contribution of ESO’s VLT, the team was able to infer that three of the planets may contain water in their interiors or atmospheres. The two planets closest to the star in the L 98-59 system are probably dry, but might have small amounts of water, while up to 30% of the third planet’s mass could be water, making it an ocean world.

Furthermore, the team found “hidden” exoplanets that had not previously been spotted in this planetary system. They discovered a fourth planet and suspect there is a fifth, in a zone at the right distance from the star for liquid water to exist on its surface.

“We have hints of the presence of a terrestrial planet in the habitable zone of this system,” said Olivier Demangeon, a researcher at the Instituto de Astrofísica e Ciências do Espaço, University of Porto in Portugal and lead author of the study.

The study represents a technical breakthrough, as astronomers were able to determine, using the radial velocity method, that the innermost planet in the system has just half the mass of Venus. This makes it the lightest exoplanet ever measured using this technique, which calculates the wobble of the star caused by the tiny gravitational tug of its orbiting planets. 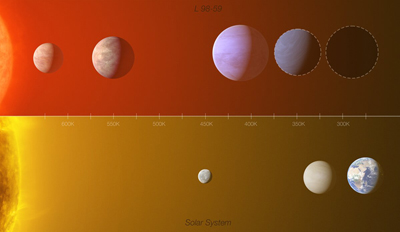 Not dissimilar: L 98-59 exoplanet system and the inner Solar System.

The team used the Echelle SPectrograph for Rocky Exoplanets and Stable Spectroscopic Observations (ESPRESSO) instrument on ESO’s VLT to study L 98-59. “Without the precision and stability provided by ESPRESSO this measurement would have not been possible,” says Zapatero Osorio.

“This is a step forward in our ability to measure the masses of the smallest planets beyond the Solar System.” The astronomers first spotted three of L 98-59’s planets in 2019, using NASA’s Transiting Exoplanet Survey Satellite (TESS).

This satellite relies on a technique called the transit method — where the dip in the light coming from the star caused by a planet passing in front of it is used to infer the properties of the planet — to find the planets and measure their sizes.

However, it was only with the addition of radial velocity measurements made with ESPRESSO and its predecessor, the High Accuracy Radial velocity Planet Searcher (HARPS) at the ESO La Silla 3.6-metre telescope, that Demangeon and his team were able to find extra planets and measure the masses and radii of the first three. “If we want to know what a planet is made of, the minimum that we need is its mass and its radius,” said Demangeon.

The team hopes to continue to study the system with the forthcoming NASA/ESA/CSA James Webb Space Telescope (JWST), while ESO’s Extremely Large Telescope (ELT), under construction in the Chilean Atacama Desert and set to start observations in 2027, will also be ideal for studying these planets.

“The HIRES instrument on the ELT may have the power to study the atmospheres of some of the planets in the L 98-59 system, thus complementing the JWST from the ground,” said Zapatero Osorio.

Demangeon concluded, “This system announces what is to come. We, as a society, have been chasing terrestrial planets since the birth of astronomy and now we are finally getting closer and closer to the detection of a terrestrial planet in the habitable zone of its star, of which we could study the atmosphere.”