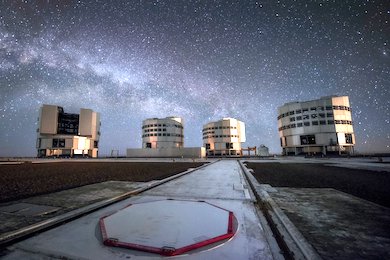 More than 4,300 exoplanets have been detected to date, distributed in almost all areas of the sky, leading to new theories about planetary formation along with many new questions.

"Our understanding of exoplanets has been driven by advances in astronomy alongside complementary work in other fields, including unmanned exploration of our solar system and theories of biochemistry," commented Misato Fukagawa from the National Astronomical Observatory of Japan in a presentation to SPIE Astronomical Telescopes and Instrumentation Digital Forum.

"The grand goal of taking a spectroscopic analysis of an exoplanet's atmosphere and identifying categorical signs of life will involve not just highly sensitive spectroscopy, but a broader scientific effort too."

Spectroscopy has, though, played a key role in the detection and characterization of those 4,300 worlds. Many have been identified through the spectral shift in the reflected light caused by their radial velocity around a star, or by sensitive measurements of the change in that star's brightness as a planet transits in front of it.

If the planet is sufficiently large, information about its atmosphere can then be gathered by transmission spectroscopy, analyzing light from the star that has passed through that atmosphere on its way to Earth.

"Exoplanets are quite diverse, with more being detected all the time in what could be habitable zones around their parent stars," said Fukagawa. "But there are many things we need to know more about. We need more statistics, more data, and more understanding of how planets form. We must focus on the birthplaces of planets."

This need has sprung from observations of the protoplanetary disks of material around stars from which planets form. Such disks are challenging objects to observe, especially for imaging at resolutions equivalent to around 1 astronomical unit in the planetary system, or around 5 milliarcseconds of view from Earth.

Observations of HL Tauri at increasingly high resolution using the ALMA radio telescope have already revealed the beginnings of an unusual planetary disk around a considerably younger star than the norm.

"A series of concentric annuli around a very young star, 0.1 million years old rather than 1 to 10 million years, was completely unexpected, and proves we need to understand young systems " noted Fukagawa. "Previous theories about how objects in a disk experience friction are simply not consistent with the disk structure we see, and we need to obtain a truer picture."

Detecting the signatures of life

A complementary suite of technologies will be employed to answer these questions. Scattered light imaging can deliver data about small grains of dust forming the surface of the planetary disk, and help to get around the inability of near-infrared light to directly penetrate the areas where the material is densely packed.

Adaptive optics will also play a key role, with advances in AO technology already helping to image stellar areas which were unobservable when the first exoplanet observations were made some 16 years ago.

Direct imaging of the exoplanets themselves remains hard. Spectroscopic technologies such as Sphere VLT and Muse VLT at the Very Large Telescope facility in Chile are making constant advances, including the occasional detection of small disks of material around certain planets, suggesting the formation of moons. But Fukagawa noted that such sightings through clear cavities in the larger planetary disks remain rare.

"Survey techniques for exoplanets are currently incomplete," commented Fukagawa. "We cannot detect a disk gap at a distance below 10 au from the star, only infer it from comparison with numerical simulations. We want to see within the 1 au region. where emission at sub-millimeter wavelengths is opaque."

A focus on locating habitable-zone planets around red dwarf stars is set to be one priority in the future study of mature planets, as astronomers attempt to make connections between those worlds and the parallel analysis of the protoplanetary material from which they form.

"The characterization of an Earth-like planet around a Sun-like star is currently very difficult," noted Fukagawa. "But I believe it will become possible. And although direct detection of the signatures of life will be a challenge, we can provide the key information about the environment of a planetary system needed to understand the broader context of an exoplanet's nature, including the potential emergence of life."