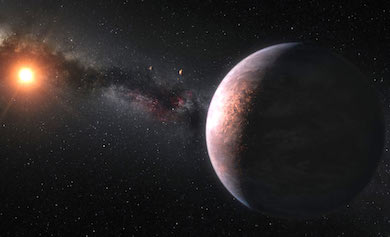 "The ESA science program has a very bright future," was the message from Martin Linder of the ESA Future Missions Department, delivered in a presentation to SPIE Optics + Photonics 2021.

He was discussing Voyage 2050, the next campaign of the ESA science program due to cover space missions from 2035 to 2050.

After an initial call for ideas in March 2019, the ESA has now distilled Voyage 2050 into a selection of science themes which will collectively set the Agency's agenda for some of its forthcoming space missions, and influence the optical technologies they will employ.

"The ESA Science Program is centered around four key questions," said Linder. "How did the universe originate; how does the Solar System work; what are the conditions for planetary formation and the emergence of life; and what are the fundamental physical laws of the universe?"

This in turn has led to recommendations for three L-class, or Large, mission science themes, the first of which is to examine the moons of the giant planets.

"A mission to one or more of the moons of Jupiter or Saturn would allow us to explore the habitability of ocean worlds," commented Linder. "This could involve characterization of their structures with instrumentation capable of carrying out a full tomography of the moons' interiors."

The second theme is the characterization of the atmospheres of temperate exoplanets, such as the world discovered orbiting the Trappist-1 ultra-cool red dwarf star.

"Mid-infrared is the optimum optical range to measure the radius and temperature of an exoplanet to test whether it is habitable," Linder noted. "It can indicate whether the planet is rocky, able to host liquid water, and reveal the signatures of important molecules."

An ESA Large Mission could be the first to measure the spectrum of direct mid-IR thermal emissions from a temperate exoplanet, and the Agency's target is to characterize at least ten such worlds. However, the complexity of mid-IR sensing, along with practical requirements such as cryogenic temperature control of the sensors, will require trade-offs to be made.

Excellent science to be done

If this goal proves to be out of reach, the Agency will redirect these efforts to pursue instead the use of near-IR astrometry in a Large mission to study the galactic ecosystem, building on the work of the existing Gaia space observatory currently carrying out astrometry and spectometer measurements in orbit.

In this case, the goal will be to expand the technology currently employed in Gaia with new detectors, capable of time-delayed integration (TDI) operation at low light levels in the near-IR spectral range.

The third Voyage 2050 theme envisages new physical probes into the nature of the early universe, answering basic cosmological questions through missions detecting gravitational waves with high precision or in a new spectral window, or by high-precision spectroscopy of the cosmic microwave background radiation.

The Laser Interferometer Space Antenna (Lisa) mission, due for launch in 2034, is already planned as a step along this path, using a trio of satellites separated by 2.5 million kilometers in space to detect gravity waves in space through interferometry.

"There are many unknowns here," commented Linder. "We want to build on the ongoing Lisa study to enhance the operational frequency range. But for now the big question is how to carry out spectroscopy on this scale and in this way."

Whatever technology the final instruments employ, Linder believes that the scope and ambition of the Voyage 2050 program shows the ambition and vitality of the ESA's space program and its optical instrumentation.

"It will take time to tackle these big topics and think about the technology that will be involved," Linder said. "There is excellent science to be done at all mission levels."