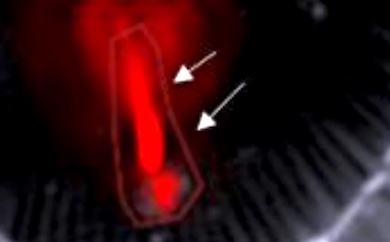 Photoacoustic (PA) imaging and its ability to image blood flow and vasculature is an increasingly attractive technique to monitor and treat a number of diseases.

The method uses a non-ionizing laser pulse to briefly heat up an absorbing target for a short instant of time before allowing it to cool, causing an expansion that in turn creates an ultrasound signal.

Hemoglobin is a particularly active PA target, allowing the technique to accurately assess blood supply in tumor margins for cancer treatments, or prior to cardiac interventions, potentially imaging within the beating heart itself.

A project at Michigan State University (MSU) has now investigated ways to boost the technique's ability to image specific marker cells in those atherosclerotic plaques appearing to be most vulnerable to breakage, and so spot the plaques likely to cause strokes or heart attacks.

"The power of our new technique is in its selectivity," said Bryan Smith, director of the Translational NanoImmunoEngineering Lab at MSU's Institute for Quantitative Health Science and Engineering (IQ). "There are certainly other methods to image plaques, but what distinguishes this strategy is that it's cellular. We are specifically looking at the immune cells, macrophages and monocytes, that are most responsible for making a plaque vulnerable in the first place."

As published in Advanced Functional Materials, the new method involves the introduction of nanoparticles into the tissues of interest, which then interact strongly with the incoming laser pulse to produce a targeted PA response.

Using nanoparticles in PA-based techniques has been a focus of study throughout their transition towards clinical applications, with gold nanoparticles in particular attractive as a means to enhance the inherent contrast from tissues imaged using PA methods. Similar particles have also been used to create PA-powered microfluidic pumps for potential biomedical devices.

Diagnosis and therapy in one technique

Rather than gold, the MSU project employed carbon nanotubes, which when injected into mouse subjects naturally and specifically sought out the particular "foamy" macrophage and inflammatory monocyte cells thought to be indicative of plaque inflammation and associated with plaque vulnerability.

Virtually no other cell type takes up the particular carbon nanoparticles employed, according to the MSU team, making the technique a potentially valuable route to identifying fragile plaques and those most likely to break up.

The MSU lab has also investigated whether the nanoparticles can be packed with a drug able to counteract further plaque growth, an approach which could allow a PA-based technique to both identify the problematic areas and monitor the action of a therapeutic.

There is currently no effective way to accurately locate and treat vulnerable plaques before they lead to a heart attack or stroke, commented Bryan Smith, so the current studies at MSU might change that.

"Can you connect those ideas, develop a combination of a therapy and a diagnostic? I think the answer is absolutely yes," said Smith. "There is a lot of potential in that realm. It's in the pipeline."