Fulfilling a 2017 contract with European Southern Observatory for the ELT, which could use up to eight guide star lasers. 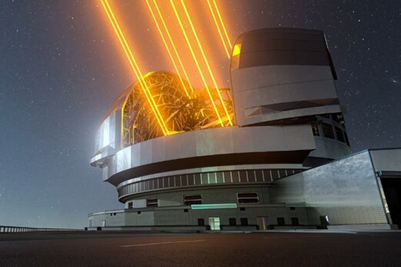 Toptica Projects (a 2017 spinoff from Toptica Photonics) has announced the delivery of the first guide star laser system for the European Southern Observatory’s Extremely Large Telescope (ELT) that is being built in the Chilean Atacama desert.

With a tight schedule for the delivery of the remaining lasers (ELT could eventually use up to eight guide star lasers) and “first light” for the telescope itself expected in the second half of the 2020s, ESO seems to be leading the race for the next-generation super telescope, commented Toptica Projects.

The guide star lasers for the adaptive optics system on the ELT are based on the laser systems that have successfully operated at the Very Large Telescope (VLT) since 2016 as part of the Adaptive Optics Facility (AOF), which has shown significant improvements in image sharpness, according to ESO.

These points of light are used as reference light sources to allow the adaptive optics system to compensate for turbulence in the Earth’s atmosphere. Unlike natural guide stars, laser guide stars can be positioned anywhere to allow the full power of adaptive optics to be used over almost the entire sky. The ELT will employ sophisticated adaptive optics technologies to ensure its images are sharper than those of any other telescope.

Anticipated observations enabled by the ELT’s powerful built-in adaptive optics system include everything from studying black holes to investigating some of the youngest galaxies in the distant universe.

This image shows an artist's impression, based on the final design for the telescope, of ESO's Extremely Large Telescope (ELT), which will be the biggest ‘eye on the sky’ when it achieves first light later this decade.

The telescope uses lasers to create artificial guide stars to measure how much the light is distorted by turbulence in the Earth’s atmosphere. The deformable M4 mirror adjusts its shape in real time to compensate for these changes in the atmosphere, helping the ELT produce images 16 times sharper than the Hubble Space Telescope.