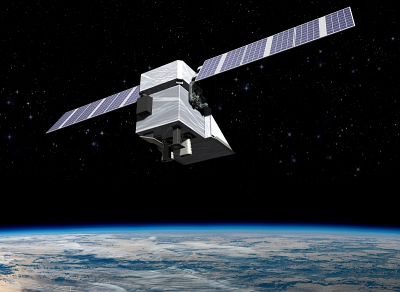 A sensitive new infrared spectrometer for monitoring emissions of methane is on track to launch in 2022, after satellite builder Ball Aerospace said it was moving into part fabrication and assembly of “MethaneSAT”.

Just six months after a preliminary design review, Ball said it had now successfully completed the critical design review of the craft’s flight system and its advanced spectrometer, which will be integrated onto a 350 kg satellite.

A subsidiary of the non-profit Environmental Defense Fund (EDF), the MethaneSAT organization says that, once launched, the spectrometer will collect “useful and actionable” data showing where, and how much, methane is escaping into the Earth’s atmosphere every week.

“It will measure methane emitted by oil and gas infrastructure worldwide at a level of precision, and on a fine scale never before achieved,” claims EDF. “And at a fraction of the cost of most space missions.”

Low-level detection ‘critical’
EDF sees the optics-based equipment as a key tool in its strategy to reduce methane emissions from the oil and gas industry by 45 per cent as soon as 2025, and which it believes may be nearly eliminated by 2050.

Although not as well known as carbon dioxide gas in terms of its contribution to climate change, methane is a particularly potent greenhouse gas.

“Detecting even low emission levels is critical, because it is estimated that roughly half of the methane being emitted from oil and gas infrastructure comes from smaller sources, which are largely unidentified,” EDF explains.

The organization says that MethaneSAT will be able detect differences in concentrations of methane as low as 2 parts per billion that, when combined with new data analysis methods, a small pixel size and a wide viewing path, will be able to quantify small emission sources over large areas.

That will complement existing methane-monitoring satellite instruments - such as the European Space Agency’s “TROPOMI” - that are more geared towards identifying major global sources of the gas.

Ohio blow-out
Last year, the multispectral imaging instrument on board TROPOMI was able to quantify a major methane “blow-out” from an Ohio gas plant that leaked more than 50 kilotons of the gas over the course of three weeks.

MethaneSAT’s finer resolution capability should also allow larger emissions to be pinpointed to within 400 meters of their source, it is believed.

“MethaneSAT will provide much higher sensitivity and spatial resolution than today’s global mappers, with a far wider field of view than point-source systems.”

Makenzie Lystrup, vice president and general manager for Ball’s “civil space” business unit, said: "We have worked closely and collaboratively with the customer and other partners to develop extremely sensitive sensor technology critical to spotting methane emissions that previously would have gone undetected." 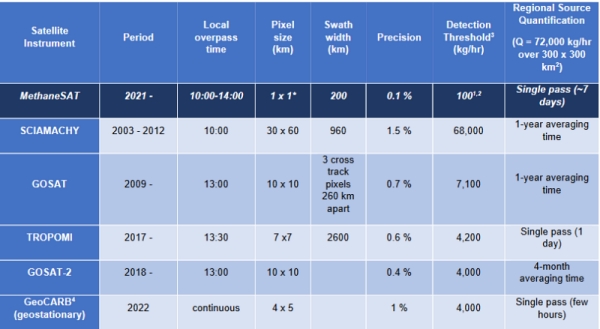 Methane source identification
The MethaneSAT spectrometer will monitor a narrow section of the shortwave infrared (SWIR) spectrum where methane absorbs strongly, allowing it to spot such low concentrations of the gas.

“From low-Earth orbit, the satellite will locate and measure emissions of methane sources almost anywhere on Earth with precision and at fine enough detail to identify these sources,” says Ball.

“The mission is expected to launch in 2022 to support EDF's stated goal of achieving a 45 per cent reduction in methane emissions from the oil and gas sector by 2025.”

MethaneSAT director Cassandra Ely added: "This is a complex, technically challenging mission driven by the profound urgency of climate change. An intensive design process up front ensures that we can move quickly from here. The result is a more powerful measurement tool than even we thought possible.

“Thanks to the dedicated efforts of our mission partners, MethaneSAT is now moving from the drawing boards and onto the assembly floor."

Glint mode for ocean sources
According to EDF, the satellite’s primary goal is to survey 80 per cent of global oil and gas operations, measuring aggregate methane emissions from virtually all known and previously unknown sources, as well as identifying the location and size of larger sources.

While the majority of the Earth’s land mass will provide enough reflectance of sunlight for imaging, there is an additional complication when it comes to locating off-shore emissions.

It means that MethaneSAT will use so-called “glint mode” imaging above the oceans, pointing its sensor directly at the bright glint spot generated where solar radiation is reflected directly off of the Earth’s surface.

But limitations include measurements at high latitudes during winter, when there would be insufficient sunlight to obtain useful data.

An idea unveiled as recently as April 2018 during a TED talk by EDF president Fred Krupp (see below), MethaneSAT has since attracted support from the New Zealand government, which last year committed $16 million to the non-profit project.