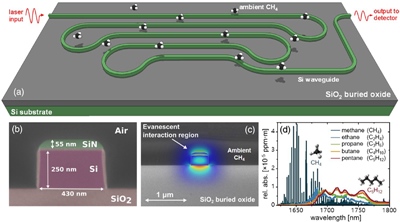 While the approach suggests that it will be possible to make low-cost but sensitive methane detectors for applications in gas-leak detection and “fugitive” emissions monitoring, the IBM researchers indicate that the spectral operating range could be extended across the mid-infrared to 8 µm - providing access to the “fingerprint” region of molecular vibrations and a much wider range of potential applications.

Scalability issues
While state-of-the-art TDLAS systems have proved themselves capable of parts-per-trillion gas detection, and handheld devices provide convenience, the relative lack of manufacturing scalability currently precludes wide-area deployment of such sensors over a large network.

William Green, lead researcher in the IBM team, indicated that the approach – which uses components developed for applications in optical communications – could cut the cost of methane-sensing spectrometers dramatically from the current level of tens of thousands of dollars.

“Moreover, with no moving parts and no fundamental requirement for precise temperature control, this type of sensor could operate for years with almost no maintenance,” he added.

Typical users might include oil and gas companies, who would be able to spot and measure leaks immediately – rather than relying on regular expert inspections.

“During natural gas extraction and distribution, methane can leak into the air when equipment on the well malfunctions, valves get stuck, or there’s a crack in the pipeline,” added Green. “We’re developing a way to use this spectrometer-on-a-chip to create a network of sensors that could be distributed over a well pad, for example. Data from these sensors would be processed with IBM’s physical analytics software to automatically pinpoint the location of a leak as well as quantify the leak magnitude.” 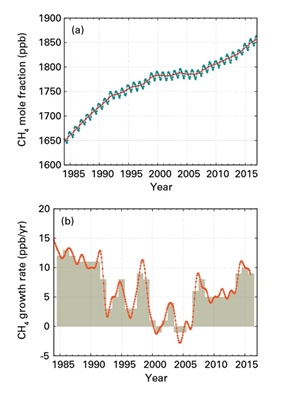 While methane represents only a tiny amount of the gas mixture that makes up the Earth’s atmosphere, it is a much more potent greenhouse gas than the far more publicized carbon dioxide. Concentrations of the latter have just risen to levels not seen in 800,000 years, according to the United Nations’ World Meteorological Organization (WMO).

The WMO’s new “greenhouse gas bulletin”, published October 30, also reported that methane concentrations rose to 1853 parts per billion (ppb) in 2016, more than three times the pre-industrial level and up from around 1650 ppb in 1984.

Evanescent field
The IBM team’s spectrometer design uses the evanescent light that escapes from a 10 cm-long but very narrow silicon waveguide to probe ambient air for methane. Evanescent approaches have been employed previously to monitor volcanic gases, where the concentration mix can indicate the likelihood of an impending eruption, or to look for signs of bacterial infection in exhaled breath.

Eric Zhang from the IBM team explained: “Although silicon photonics systems - especially those that use refractive index changes for sensing - have been explored previously, the innovative part of our work was to use this type of system to detect very weak absorption signals from small concentrations of methane, and our comprehensive analysis of the noise and minimum detection limits of our sensor chip.”

While the current IBM setup includes fiber connections and does not integrate the laser or detector within the “chip”, the team is working to eliminate the fiber elements and develop a fully integrated setup.

“Our work shows that all of the knowledge behind silicon photonics manufacturing, packaging, and component design can be brought into the optical sensor space, to build high-volume manufactured and, in principle, low cost sensors, ultimately enabling an entirely new set of applications for this technology,” said Green in a statement.

And in their journal paper conclusions, the IBM team suggested that the spectrometer could be extended well beyond the near-infrared region, writing:

“Indeed, with novel waveguide architectures to avoid absorption from the buried oxide, the transparency of silicon up to 8 µm allows our [spectrometer] to be applied to molecules in the mid-IR range, thus presenting on-chip silicon photonic integrated sensors as an enabling platform for broadband, multispecies detection.”