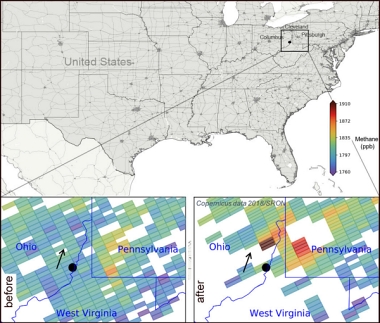 Data from photonics equipment on board the European Space Agency’s (ESA) Copernicus Sentinel-5P satellite has revealed that an explosion in a gas well early last year sent huge quantities of methane into the atmosphere.

Measured using the Tropospheric Monitoring Instrument (TROPOMI), a multispectral imaging spectrometer, the results indicate that far more of the potent greenhouse gas was released by the damaged well in Ohio than had been feared at the time of the blowout.

Published this week in Proceedings of the National Academy of Sciences (PNAS), a journal paper authored by the TROPOMI team calculated an emission rate of around 120 tonnes per hour from the satellite data.

Over the 20 days that the leak is thought to have been active, that equates to more than 50,000 tonnes of methane - said by the authors to be equivalent to a substantial proportion of the anthropogenic methane that is emitted by several European countries per year.

Mapping capability
“The study reveals the importance of using satellite data to detect and quantify pollutants such as methane,” said ESA.

Claus Zehner, the agency’s mission manager for Sentinel-5P, added: “These measurements show that satellites can measure the concentrations of greenhouse gases emitted by a point source.”

These kinds of gaseous emissions are extremely difficult to spot and even harder to quantify. Where the TROPOMI hardware helps is that it operates across the UV-visible (270-500 nm), near-infrared (675-775 nm), and short-wave infrared (2305-2385 nm) spectral bands.

That gives it the ability to map pollutants including nitrogen oxide, carbon monoxide, and aerosols - as well as methane.

“With a resolution [of] 7 km × 3.5 km, it has the potential to detect air pollution over individual cities,” points out ESA. “With its global coverage and open data policy, [Sentinel-5P] support[s] global efforts to monitor pollution and to improve our understanding of chemical and physical atmospheric processes.”

Launched in October 2017, Sentinel-5P and its payload had only just become operational when the blowout from the ExxonMobil-owned gas well - which at the time received minimal coverage - took place. 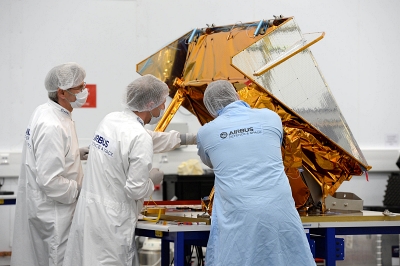 MethaneSAT targets sensitivity
According to a report this week from CNN, the giant energy firm says it “deeply regretted” the incident, and was committed to working with researchers to identify the best way to detect and measure methane - including with satellites.

With nearly a million oil and gas wells similar to the one that produced the Ohio blowout in the US alone, and the knowledge that methane is a far more potent greenhouse gas than carbon dioxide, that need is clear.

Another space mission that ought to help with that effort received a boost last month when the New Zealand government committed $16 million to the non-profit “MethaneSAT” project.

Scheduled for launch in 2022, MethaneSAT plans to use two spectrometers, one a narrow-band short-wave infrared instrument, to measure methane concentrations down to just 2 parts per billion over a 200 km view path. By comparison, TROPOMI produces results in the parts-per-million range.

“MethaneSAT will locate and measure methane emissions from oil and gas operations almost anywhere on Earth with precision and at a scale never before achieved, at a fraction of the cost of most space missions,” claim the project backers, who have selected Ball Aerospace to build the instrument.

The first satellite designed to continuously monitor the planet for methane leaks made a startling discovery last year: A little known gas-well accident at an Ohio fracking site was in fact one of the largest methane leaks ever recorded in the U.S. https://t.co/tvkDW8HtlF