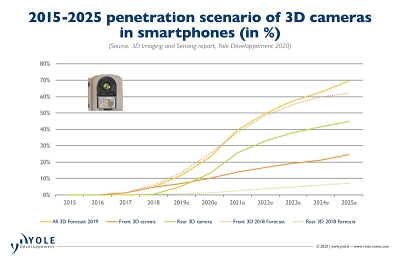 The annual global market for optical 3D imaging and sensing devices will to treble to $15 billion within five years, according to the latest prediction from French analyst firm Yole Développement.

The Lyon-headquartered industry commentators reckon that following Apple’s adoption of the technology for front-facing facial security in its recent iPhones, a broad-based switch to rear-facing applications in Android smart phones will propel a sustained 20 per cent annual growth rate through 2025.

It means that the market for 3D sensing devices in phones and consumer devices should grow from the current level of $2 billion to $8 billion in 2025, while the figure for automotive is set to jump from less than $1 billion to $3.7 billion over the same period.

Industrial, medical, and defense applications will also push market growth - though at a much slower rate, thinks the Yole team.

Switch to ToF
“With the introduction of the iPhone X in September 2017, Apple set the technology and use-case standard for 3D sensing in the consumer space,” states Yole. “Two years later, Android phone makers have taken a different approach, using time-of-flight (ToF) cameras instead of structured light, and are placing them on the rear of the phone.”

“Compared [with] structured light, ToF modules only need a VCSEL and a diffuser on the emitter, which is less complex,” Liu explained. “ToF sensors have now improved a lot thanks to the BSI [back-side illumination] technique. They have also gained a cost advantage within a maturing ecosystem. This is the main reason why ToF has won the favor of Android phone makers.”

According to Yole’s updated 3D imaging & sensing report, that key trend will see rear-facing modules surpass front-facing applications in the coming years. Liu and colleagues suggest that by 2025 about 70 per cent of new smart phones will feature a 3D sensor of some kind - with the share of rear-facing units approximately double that of front-facing sensors.

“The most important component in this application, lidar, is now focused on by a large number of suppliers,” Liu added. “There are a wide range of lidar technologies to choose from, making the field as a very competitive one.”

Key relationships
In its market report, Yole details some of the main supplier relationships that have sprung up in the fast-growing sector.

For example, it says that ToF receivers from key provider Sony feature in high-specification phones from Oppo, Samsung, and Huawei. However, the VCSEL components inside those Sony receivers are provided by a variety of photonic device manufacturers.

Another key VCSEL provider, the Austrian sensor maker ams, is designed into smart phones from Vivo and LG, alongside ToF receivers from Panasonic and Infineon Technologies respectively.

The Yole team cites a recent tear-down of Huawei’s P30 Pro smart phone by analysts at System Plus. It is said to use VCSELs from Lumentum, and to feature a Sony ToF sensor based on BSI with 10 µm size pixels and a resolution of 47 kilopixels. 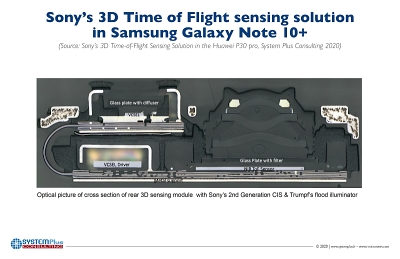 Phones and beyond
In terms of applications, the Yole team stresses that ToF sensors remain in their infancy right now, but suggests they are primed to proliferate both inside phones and beyond.

“3D rear sensing in mobile [phones] should diversify its application use cases,” stated the firm. “First used for photography, to enhance bokeh [i.e. soft-focus background] and zoom capabilities, it will expand into augmented reality and gaming.

Yole goes on to detail how the growing adoption of ToF technology and the US-China trade impasse have impacted the emerging supply chain for light-based 3D sensors.

“The mobile 3D sensing supply chain is changing rapidly,” reports Yole’s principal analyst for imaging, Pierre Cambou. “As structured light technology was introduced in iPhones in 2017, companies like Lumentum, ams, and STMicroelectronics won this first round.”

Cambou adds that Princeton Optronics (now part of ams) and Finisar were then able to penetrate the market, quickly making it a more competitive space.

Among the key consolidatory moves since then have been last year’s acquisition of Finisar by II-VI, Philips Photonics becoming part of Trumpf, and ams’ ongoing attempt to buy Osram.

Meanwhile in China, Vertilite has been able to enter the fray, taking advantage of the fact that the VCSEL output beam of the flood emitter used in ToF sensors requires no coding - and is therefore easier to produce.

“This move was also driven by the policy of China cultivating local supply chains in the middle of the US-China trade conflict,” points out Yole.

Sony’s key move was to acquire Belgium-based SoftKinetic back in 2015. “This move brought Sony from a zero market share position in 3D sensing receiver chips to 45 per cent by the time ToF camera modules took off in 2019,” reckon Cambou and colleagues.

However, they also expect Samsung and STMicroelectronics to challenge Sony with their own new ToF array sensors this year - an early example of which is the Note 10+ incorporating VCSELs from Philips Photonics.