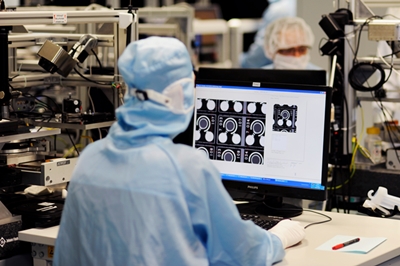 Trumpf is set to acquire Philips Photonics, in a deal that will see the German industrial laser giant diversify into 3D sensing and data transmission applications.

Ulm-headquartered Philips Photonics specializes in vertical cavity surface-emitting lasers (VCSELs), and in recent years has become a key supplier of the devices for high-end smart phone applications like face-scanning security.

Just a month ago, the firm said it had reached the milestone of one billion VCSEL shipments, the majority of which have been sold in the past two years after a significant scale-up in production. More than 500 million smart phones are thought to be equipped with Philips Photonics laser diodes.

And despite recent worries in the smart phone 3D sensing sector resulting from lower-than-expected sales of Apple’s latest generation of iPhones, Philips Photonics told optics.org that its plans for further expansion remain on track. “We are seeing solid and sustainable demand for VCSELs going forward,” the firm said in November.

Automated production
Philips Photonics’ general manager Joseph Pankert added in a Trumpf release: “We are very excited to become part of Trumpf. This will ensure that the division can continue to grow in a highly innovative company in the future.”

The company manufactures its VCSEL devices in a high-tech facility in Ulm, but also has locations in Aachen, Germany, Eindhoven in the Netherlands, plus sales offices in Shenzen, Shanghai, and Qingdao in China. It employs 280 people.

Philips Photonics also has a relationship with the UK-headquartered epiwafer foundry IQE. The two companies previously collaborated on the €23 million “VIDaP” project, partly funded by the European Commission and German's Ministry for Education and Research. It paved the way for much higher volumes and fully automated production techniques on 4-inch compound semiconductor wafers.

As well as 3D sensing in phones, the VCSEL technology developed at Philips Photonics is used in datacoms modules, while higher-power devices are being investigated for applications in lidar systems for autonomous vehicles, infrared heating, and laser materials processing.

Strategic thinking
Nicola Leibinger-Kammüller, CEO of family-owned Trumpf, said of the deal: “With this acquisition, we want to open up new product fields and expand our existing portfolio at a strategically important point. Through the acquisition, Trumpf will expand its access to fast-growing markets in the photonics and digital products sectors.”

Originally founded as startup Ulm Photonics back in 2000, the VCSEL company was acquired by Philips in 2006. Since then it has remained under Philips’ ownership, despite the protracted sale of both the Philips Lighting and LED-focused Philips Lumileds businesses as its parent company looked to concentrate on core areas like medical equipment and consumer goods.

Neither company has revealed details about the price of the Philips Photonics deal, which is expected to complete in the second quarter of 2019 - assuming various regulatory clearances are granted.

However, Trumpf did say that the acquisition represented its largest since it bought the China-based machine tool company JFR back in 2013. Since then, the Ditzingen-headquartered firm has expanded with deals to buy the ultrashort-pulsed laser specialist Amphos, precision carbon dioxide laser maker Access Laser, and the fiber laser firm JK Lasers (the latter for $31.5 million).