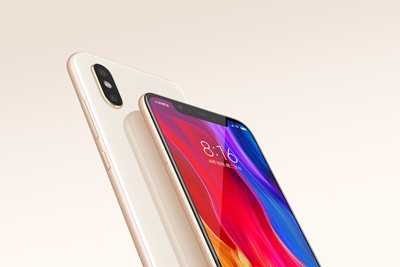 A newly launched smart phone from Chinese OEM Xiaomi has become the first Android handset to feature 3D facial recognition technology based on an array of lasers.

Previously only seen on Apple’s iPhone X, the appearance in Xiaomi’s “Mi8 Explorer Edition” indicates that 3D sensing could become a more widely adopted technology – and looks like good news for companies that have been investing in vertical cavity surface-emitting laser (VCSEL) production capacity.

Ramping up VCSEL capacity
The Xiaomi smart phone uses an array of low-power VCSEL emitters made by the Austrian sensor firm ams, which has been spending millions to scale up its internal production capacity in Singapore, and last year acquired US-headquartered VCSEL specialist Princeton Optronics in a deal worth up to $75 million.

ams announced that that its “PMSIL” laser emitters are enabling “the world’s first implementation” of user face recognition in a smart phone based on the Android platform.

It describes the PMSIL as a complete VCSEL flood illuminator system with an integrated eye-safety interlock, with a very high optical efficiency that minimizes drain on the phone’s battery.

The 3mm x 3mm x 1mm package is said to feature high spectral stability with changing temperature, and a spectral width narrower than 1 nm. “Its engineered beam profile can be precisely configured to the needs of specific smart phone applications,” adds the firm.

Hui Nie, ams’ general manager for VCSEL products, claimed in a company release: “To fit the slim, bezel-less design of the Mi8 Explorer Edition, Xiaomi’s designers wanted to build the smallest possible face recognition system, which led them to evaluate the ams IR VCSEL arrays. Once they tested the power consumption of the ams devices against that of competing products, the overall superiority of the ams parts became very clear.”

Competitive scene
News of the Xiaomi adoption comes at a tricky time for ams, which is battling to win customers against US rivals Lumentum, Finisar, and II-VI, as well as fellow European outfit Philips Photonics, another to recently increase capacity.

In its most recent set of financial results, posted in April, Premstaetten-headquartered ams reported a “significant under-utilization” of capacity, while it is also borrowing heavily to finance its expansion.

Much like its rivals, ams had witnessed weak demand in the smart phone market in the early part of this year, but remained confident that the desire for 3D sensing and security applications in new smart phones would emerge as 2018 progressed.

“ams sees consumer OEMs actively engaging with the company on 3D sensing and other new upcoming sensing functionalities, all driven by the need for differentiation,” stated the firm, adding that it was confident of significantly broader adoption in the near future.

“ams is preparing for major second-half 2018 ramp-ups of high-volume optical solutions for consumer 3D sensing applications,” added the company, pointing out that despite the current under-utilization of capacity - caused in part by changes to a major consumer program - it would not reduce the trained workforce in its Asian manufacturing locations.

ams is also working on more advanced applications of the technology, including higher-power VCSEL arrays for potential use in autonomous vehicles, as well as spectral sensing.