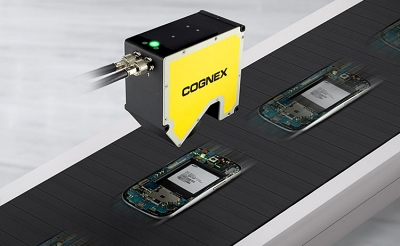 Cognex, one of the leading global providers of machine vision equipment, has reported a significant downturn in revenues and underlying profits for the closing financial quarter of 2019.

At just under $170 million, quarterly sales were down 12 per cent on the same period in 2018. And although tax-related accounting quirks pushed up net profits in the latest quarter, the Natick, Massachusetts, firm’s operating profit of $18 million was sharply down from $45 million a year ago.

“No significant new technology or form factors for smart phones entered the market in any major way in 2019. As a result, revenue from consumer electronics contracted by about 30 per cent year-on-year.”

With automotive revenues also down by 10 per cent for the full year after several manufacturers delayed capital spending plans, those trends outweighed growth in demand from the logistics sector, which is at an earlier stage in its adoption of machine vision.

It means that after delivering record sales figures for the past several several years, the 2019 figure of $726 million was down 10 per cent from 2018's record-breaking total of $806 million.

“Consumer electronics and automotive are large markets for machine vision that we believe will resume growth in the future,” Willett told an investor conference call, adding that it was unclear exactly when that growth in demand would materialize.

“These markets are between major technology shifts,” he pointed out. “Consumer electronics is transitioning from 4G to 5G, and automotive from combustion engines to electric vehicles. Manufacturers aren’t expected to meaningfully expand their capacity as they wait for these changes.”

Apple turnover
One of the most significant reasons for the slowdown is a reduction in business from key customer Apple. Between 2016 and 2018, the tech giant accounted for more than 10 per cent of Cognex’ annual sales - meaning that the machine vision firm was obliged by US Securities & Exchange Commission (SEC) rules to quantify exactly how much business Apple was responsible for.

Last year, however, that total shrank dramatically. In fact, for 2019 the Apple total was below the 10 per cent reporting threshold - meaning that although it was not detailed separately, it must have been below $73 million, and down at least $64 million year-on-year.

Discussing whether that prior level of business might be regained in the future, Willett told investors that the emergence of 5G, augmented reality, and new display formats could provide the impetus - although not imminently.

“I think if those things were really [to] come together with a big new kind of technology roll-out, [it] has the potential to do that,” he said. “But it’s very difficult to know and see, if and when those technology changes are going to hit.”

Willett added that the emergence of the coronavirus in recent weeks would likely push out any rebound in the auto industry into 2021.

Looking ahead, the Cognex management team has pencilled in a $10 million negative impact on sales because of coronavirus-related disruption in the current quarter. Willett and colleagues now expect to post sales of between $155 million and $170 million for the three months ending March 31.

In addition, the company has told its employees (referred to as “Cognoids”) not to travel to or from China. “Our China Cognoids are currently safe and most of our employees [there] are working from home,” Willett said.

• Following last week’s results announcement, Cognex’s share price remained steady. Trading at around $54 and still close to its long-term high on the Nasdaq, the company is valued at more than $9 billion.