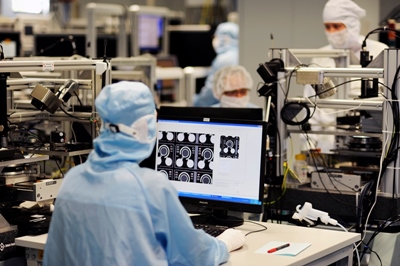 News of the order, combined with IQE saying that it expected two further customers to follow suit in the “next few weeks”, sent shares in the UK-headquartered company up in value by more than 10 per cent on the London Stock Exchange.

Capacity build
IQE has been busy installing a huge amount of additional manufacturing capacity at its new “megafoundry” in Newport, in anticipation of widespread demand for VCSELs across a broad suite of applications. It says that product qualification is now at an advanced stage with more than ten customers.

The best-known deployment of the devices so far has been in Apple’s iPhone X family, where an array of the devices identifies users by facial security scanning.

But now other major smart phone manufacturers are adopting the technology. Earlier this week II-VI said that it had secured a key design win with what it called a leading producer of Android phones.

Like II-VI, IQE is ramping production through epilayer deposition on 6-inch gallium arsenide (GaAs) semiconductor wafers. The Newport megafoundry is said to be the largest outsourced epitaxial facility for advanced compound semiconductors in the world, and has been under construction for the last 18 months.

Currently it has ten large-scale production metal-organic chemical vapor deposition (MOCVD) tools installed at the facility, with space for another 90 if required.

Its CEO Drew Nelson said in a company release: “We have a powerful and extensive roadmap for VCSEL technology, which we believe will help the acceleration of the deployment of VCSELs across many end applications.”

The application of VCSELs and VCSEL arrays beyond Apple’s smart phones should help IQE and the rest of the supply chain cope with fluctuations in demand from individual customers. Earlier this year, the stock prices of Lumentum, II-VI, and IQE were all hit when Apple said that its latest iPhones were selling in smaller volumes that it had anticipated.

IQE reported a “sudden disruption” in the supply chain last November, which led to a decline in demand and lower VCSEL-related revenues than it had previously expected during 2018. That disruption also prompted a sudden 30 per cent drop in the stock price of Lumentum, a supplier to Apple.

Other major VCSEL players include the now Trumpf-owned Philips Photonics, which has previously worked closely with IQE, and Finisar, now set to become part of II-VI under a merger deal valued at $3.2 billion.