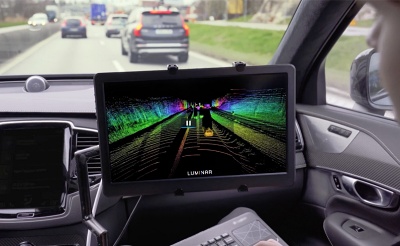 Volvo Cars has announced plans for the global unveiling of its EX90 car - the first to feature lidar as a standard safety feature - on November 9.

The Swedish auto maker, long associated with pioneering vehicle safety, claims that the software and sensors in its new all-electric SUV should help reduce accidents that result in serious injury or death by up to 20 per cent.

Founded by Austin Russell and Jason Eichenholz, Luminar received backing from Volvo’s technology investment fund in 2018, and in 2020 the car company said it would deploy Luminar’s lidar in new vehicles, with production slated to begin in 2022.

“Our lidar senses the road in front of you, whether it’s day or night, also at highway speeds,” Volvo said in a release announcing the November 9 reveal. “It can see small objects hundreds of meters ahead, creating more time to inform, act and avoid.”

The company estimates that the combination of lidar and other sensors will improve overall crash avoidance by up to 9 per cent, potentially translating to millions of accidents avoided in the longer term.

‘Born with lidar’
In a “keynote” address on social media, Volvo CEO Jim Rowan likened the introduction of a sensor suite to generate a point-cloud view of a car’s surroundings to that of the three-point seatbelt back in the 1950s.

“The safety standard in our next car will be beyond any Volvo car before,” he said. “Our mission is to help protect you from all the risks.

“In just a few weeks, we will show you the new Volvo EX90, our first Volvo car in a new era - born electric, born with lidar.”

“When all our safety systems, sensors, software and computing power come together, they create a preventative shield of safety around you - and you won’t even know it’s there until you need it.”

Commenting on the forthcoming launch, Luminar said: “The debut will mark Luminar’s first global launch of its technology on a passenger vehicle - a major milestone for the company that is the culmination of a multi-year extensive collaboration for next-gen safety and autonomy in series production cars.”

CEO Russell echoed Rowan's comments, saying: “The world will look back on this moment in the same way as Volvo’s introduction of the modern seatbelt - catapulting the industry forward in vehicle safety.”

Luminar's lidar system is based around a fiber laser emitting at 1550 nm, designed in-house from the chip level, that thanks to laser eye safety regulations is able to deploy much more power than shorter-wavelength lidar sensors that are more typical in the industry, thus improving range.

The company emerged from stealth mode in 2017 after raising $36 million in early-stage financing, and has since listed on the Nasdaq with a special-purpose acquisition company (SPAC) deal that raised $600 million.

Since then it has made moves to acquire component providers Optogration and Freedom Photonics, and has reportedly inked supply deals with Nissan and Mercedes.