US firm emerges from stealth mode with bold technology claims based around adoption of 1550nm wavelength. 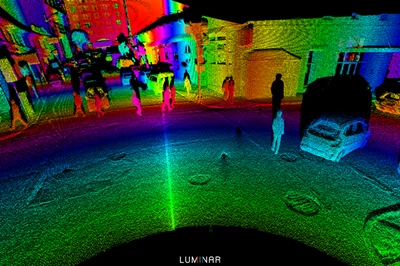 Luminar Technologies has announced itself as the latest lidar company whose sensors are set to revolutionize the automotive industry, emerging from “stealth mode” boasting $36 million of seed financing and a 50,000 square-foot production facility in Orlando.

Last year two of the lidar scene’s major players – Quanergy Systems and Velodyne – raised a combined $240 million, and both are now in the process of ramping their solid-state sensor production to volume levels at dedicated manufacturing sites.

200m range claimed
For its part Luminar is making some bold claims in terms of sensor performance and - in particular - range, one of the key challenges that faces all lidar developers.

“It has the ability to see 50 times greater resolution and 10 times longer range than current systems,” claims the firm, although it has not provided independent validation detail - other than to say that unspecified customers have run their own tests. “This means that at 200 meters, Luminar can detect hard-to-see, low-reflectivity objects like a black car or tire on the road, and offer a full seven seconds of reaction time at 75 miles per hour," says Luminar.

In terms of manufacturing plans, Luminar adds that, right now, it is in the middle of a production run with “four major autonomous vehicle programs”, for early-stage testing. “A 10,000 unit run will begin out of its new 50,000-square-foot manufacturing facility in Orlando, with deliveries later this year,” it added.

The firm's high-performance approach to lidar technology is based around 1550 nm lasers – a longer wavelength than is typical for lidar, and one more usually associated with long-haul optical communications – and the InGaAs sensors needed to detect those photons.

Chip-level design
That choice of wavelength will likely raise some eyebrows in terms of its implications for overall system cost, but Luminar says that it has made “a number of breakthroughs” to reduce the expense - although technical details are scant.

"Traditionally, 1550 nm systems have been far too expensive to produce at scale, with the receiver alone costing thousands of dollars just for the raw material," Luminar told optics.org. "To circumvent that challenge, Luminar designed its system from the chip-level up rather than buying components off the shelf, building its own lasers and receivers to make 1550 nm work while being cost-effective."

The company's take is that so far the lidar sector has been engaged in a "race to the bottom" in terms of price, which has negatively impacted quality. "This is simply the wrong race," said a company spokesperson. "Luminar has focused first on building the first lidar system that can meet the safety requirements of the auto industry’s needs. At the same time, we’ve taken a deliberate architecture approach to ensure manufacturability and at scale."

Luminar says that it has no set price targets for the planned 10,000-unit run, only that it will be scaling the systems in a way that will "ensure that safe autonomy can be ubiquitous."

Seed capital
Aside from the technology claims, Luminar says that it already employs 150 people, and has attracted $36 mllion in seed capital from investors Canvas Ventures, GVA Capital, and 1517 Fund, among others.

Two acquisitions - one of a contract manufacturing company and the second of Eichenholz's earlier Open Photonics technology development company - have swelled the employee ranks.

And alongside CTO Eichenholz in the startup’s boardroom is Luminar’s CEO and co-founder, Austin Russell. According to a Luminar fact sheet, he started up the company in 2012, with a Youtube video for the Star Trek-inspired Qualcomm Tricorder XPRIZE competition suggesting an initial focus on both lidar and hyperspectral imaging technologies.

The young entrepreneur is said to have studied briefly at Stanford University before dropping out to accept a Thiel Fellowship, backed by the controversial PayPal co-founder and early Facebook investor Peter Thiel.

“We had to find 2,000 ways not to make a lidar system, before we found the one way that finally delivers on what the industry needs,” said Russell in a Luminar statement. “We made a breakthrough that will allow self-driving cars to be ubiquitous and, most importantly, safe.”

Among the dozens of protagonists targeting the same market as Luminar, Quanergy and Velodyne are California-based TetraVue, Israel’s Oryx Vision and Innoviz Technologies, and LeddarTech in Canada. On top of that competition, Google-owned Waymo and Uber subsidiary Otto are currently engaged in a courtroom battle over each other's home-grown lidar technology, with Waymo alleging multiple patent infringement.