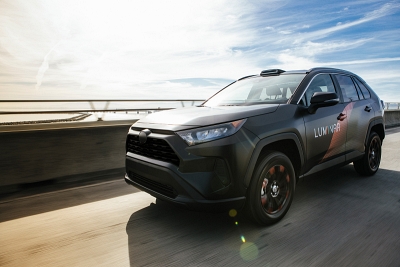 Luminar Technologies, the automotive lidar company, has completed a merger deal and is now listed as a public company on the Nasdaq under the ticker symbol “LAZR”.

The reverse merger agreement with “special purpose acquisition company” Gores Metropoulos - details of which were revealed in August - has boosted Luminar’s cash reserves by nearly $600 million.

In pre-market trading ahead of its December 3 debut on the exchange, the LAZR stock rose in value from its listing price of $18 to around $22.

Institutional support
Completion of the reverse merger deal means that Luminar has raised close to $590 million cash in total, comprising $406 million direct from Gores Metropoulos, and $184 million in financing proceeds from the public listing.

According to a Securities & Exchange Commission (SEC) filing dated September 8, 2020, Luminar had at that point raised $170 million out of an intended $200 million from 84 individual investors.

Key contributors include private equity billionaire Alec Gores from the Gores Metropoulos fund - who now sits on the Luminar board of directors - and the well-known technology industry entrepreneur Peter Thiel, co-founder of PayPal.

Luminar is also known to have worked closely with the likes of Audi, Toyota, and Daimler Trucks, and last month announced a collaboration with Intel subsidiary Mobileye, a key player in the autonomous vehicle sector.

Luminar’s 25-year-old CEO Austin Russell, who founded the company when still a teenager, said in a release: “This is an incredibly proud moment for the entire Luminar team and a milestone for the industry at large.

“Over the past few years, we’ve made the transition from a technology development startup to now a global provider of autonomous systems to many of the world’s largest OEMs and commercial trucking players to power their autonomous future in production.

“We look forward to accelerating widespread commercial adoption of autonomy and proactive safety solutions and embarking on the next phase of our journey as a public company, which will solidify our leadership position well into the future and enable autonomy at an unprecedented scale.”

We took on a problem that many thought would be unsolvable…today’s a big day – we’re one step closer to making autonomous transportation safe and ubiquitous! $LAZR #Nasdaq #NasdaqListed https://t.co/Yv7vSd1TwN pic.twitter.com/oqe2VStc9f

1550 nm focus
Prior to the latest funding developments, Luminar had already attracted more than $250 million in venture support, alongside several accolades for its 1550 nm laser-based technology, including a Photonics Prism Award in 2018 for its "Model-G 3D LiDAR" system.

The company has long contended that the longer wavelength - most automotive lidar systems are based around 850 nm emitters - brings major advantages in terms of eye safety regulations, and the power that can be deployed to meet critical sensor range requirements.

Ahead of the merger completion, Luminar said that “accelerating customer engagements”, particularly in the trucking segment, had prompted it to raise financial expectations.

• Luminar co-founder and CTO Jason Eichenholz – an SPIE Fellow – is actively engaged with SPIE serving in many volunteer leadership roles and has presented at several SPIE events over recent years.