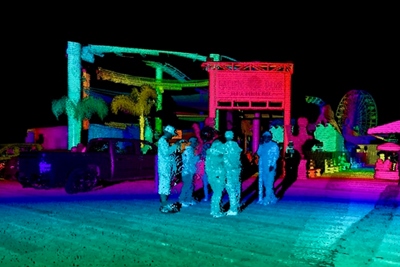 The startup, which is one of the few lidar firms to incorporate 1550 nm wavelength lasers in its designs, says that a fresh injection of funding has enabled it to accelerate plans to penetrate the automotive market with a new low-cost turnkey system.

“A recent addition of $100 million, along with previously unannounced capital, brings the company’s total raised to date to more than $250 million,” stated the firm, whose backers include the likes of Volvo and optical glass giant Corning.

Sub-$1000 cost
Luminar describes its Iris platform as the next major milestone in the industry, just over a year after it launched a sensor unit aimed at autonomous development fleets. “[It] is the first sensing platform to exceed the essential performance, safety, cost and auto-grade requirements needed to deliver Level 3 and 4 autonomy to consumers,” claims the firm.

By exploiting the higher power on offer at 1550 nm thanks to the less onerous eye safety requirements compared with shorter wavelengths, Luminar's strategy has been to deliver high-performance sensors capable of distinguishing between different types of dark objects at the long stand-off distances needed for safe autonomous transportation.

The flip side is that the emitters and detectors operating at the longer wavelength are typically more expensive to produce.

But now the company believes that the high-performance capabilities can be delivered in a “highly compressed” new version of the Iris platform and with a price tag of no more than $1000.

Luminar’s CEO Austin Russell said in a release announcing Iris and the funding milestone: “We're at a stage where everyone in the industry is hacking together Frankenstein solutions with off-the-shelf parts for their R&D programs, but to successfully achieve series production autonomy, hardware and software have to be seamlessly developed and integrated in tandem.

“This combined, turnkey solution for series production vehicles is key to democratizing autonomy in the industry, enabling every automaker to deliver on the promise of self-driving capabilities on their vehicles.”

Acceleration
Russell and colleagues point to the combination of its in-house developed software and hardware as critical to the performance of Iris. “For the first time, Luminar is delivering a comprehensive hardware-software architecture for perception of the driving environment,” it claims, noting that the company now has 60 people in a software team headed up by former Daimler-Mercedes lead developer Christoph Schroder.

Luminar’s progress should also be assisted by the presence of key partners Corning and Cornes. The US-headquartered optical glass giant is helping out with lidar windows and other optical components, while the Japanese conglomerate Cornes brings sales and servicing expertise in the luxury vehicle sector.

Ben Kortlang, a founding partner at investor G2VP, said in Luminar’s announcement: “We’ve been following the lidar industry closely for the last five years, watching for a technology leader to emerge that can enable Level 4 autonomy.

“With the release of Iris, Luminar uniquely offers a lidar solution that meets the performance, safety and cost metrics that OEMs require to commercialize autonomous vehicles. Luminar’s product is the enabling technology that will put autonomous vehicles on the road sooner than we expected.”