Semiconductor industry lynchpin says that customers will still want its tools, even in the event of a moderate recession. 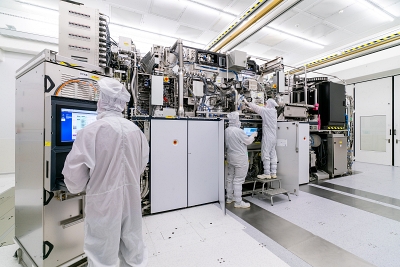 ASML executives have reiterated their confidence that demand for the firm’s lithography tools - critical for making semiconductor chips - will remain solid for the foreseeable future, despite growing fears of a recession in 2023.

The company, which posted sales of €5.4 billion for the second quarter of the year, also registered record-breaking orders totalling €8.5 billion - including €5.4 billion for current and next-generation extreme ultraviolet (EUV) systems, which rely heavily on optics and photonics technology.

Despite the impact of ongoing supply chain constraints, CEO Peter Wennink said: “[For] 2022 the demand is still significantly higher than what we can make. This was the situation in the last quarter [and] it’s still the same. We don’t see any demand reduction.”

However, those constraints will have a knock-on effect on the sales figures that ASML is able to post for 2022 overall.

Wennink explained that ASML’s introduction of “fast shipments” - where customers receive tools around a month earlier than previously agreed and before they have completed all factory tests - means, counter-intuitively, that ASML can only recognize revenue for the shipment at a later date.

Supply chain challenges
For 2022, those faster shipments will now result in pushing some €2.8 billion of revenues into next year, up from the previously expected figure of €1 billion.

But Wennink and ASML’s CFO Roger Dassen insist that this is solely an accounting issue, and that there has been no let up in demand for systems from customers who want to scale up production - partly to ease those capacity constraints in the semiconductor chip supply chain.

“Some customers are indicating signs of slowing demand in certain consumer-driven market segments, yet we still see strong demand for our systems, driven by global megatrends in automotive, high-performance computing, and [the] green energy transition,” he said.

“Customers will still want tools in a moderate recession,” added the CEO, pointing out that there are eight giant new fabrication facilities under construction - each of which will rely on both EUV and deep-UV lithography equipment to produce state-of-the-art chips.

“Yes there may be a slowdown, but innovation won’t stop, [and] I think we are going to ship those machines,” Wennink predicted, with Dassen commenting: “Delays are purely due to constraints in the supply chain, not because of customer push-outs.”

The ASML executive team also suggested that the switch to “fast shipments” could become a permanent feature in the future, as so far there had been no issues associated with the reduced number of pre-shipment tests - indicating that some of those tests may be surplus to requirements.

Need for machines
Responding to renewed speculation that US authorities are pressuring their counterparts in The Netherlands to restrict the shipment of deep-UV lithography tools to customers in China, Wennink pointed out that such a move could backfire and cause even greater supply chain constraints, because China is an important producer of standard semiconductor devices.

“We have to be careful with what we are doing,” the CEO told investors.

Looking ahead, he and Dassen said that the impact of the accelerated tool shipments but delayed revenue recognition will mean that ASML’s sales are now expected to grow by “only” 10 per cent this year - down from the figure of 20 per cent that had been pencilled in previously.

Those delays, combined with inflationary effects, will also impact ASML’s profit margins this year - although could end up being recouped next year.

“For 2023 you have to ask the question: what kind of recession are you looking at?” Wennink stated in an in-house ASML interview.

“If it’s a moderate recession I think the impact will be very limited, for the simple reason that we have such a big backlog, [and] that our customers are coming to us and saying ‘listen, if we see a slowdown, sure, but one thing is certain: we want your machines’.”

• Following the update ASML's stock price rose in value slightly in early trading July 20, to just over $505 on the Nasdaq exchange.