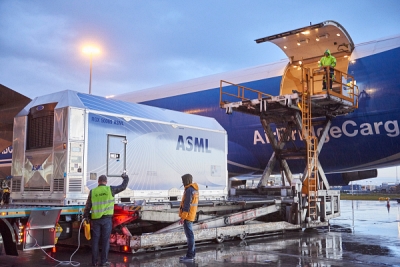 ASML, whose laser-powered lithography tools are fundamental to semiconductor device manufacturing, has posted record-breaking orders as its customers ramp production capacity in response to the global chip shortage.

The Veldhoven, Netherlands, company said that in the financial quarter ending June 30 it received €8.3 billion in orders - sharply up from €4.7 billion registered in the March quarter.

“[That’s] the highest quarterly order intake we’ve ever seen,” said ASML’s CEO Peter Wennink. “Everybody is working extremely hard, us and our suppliers, to actually produce more machines. Because our customers are craving those machines.”

Memory boost
While nearly all EUV equipment sold thus far has been used to produce logic chips, Wennink now expects that memory will account for €1 billion in sales of EUV tools this year.

“Basically it’s technology investments that our customers are [making] for ramping next year, and the year after,” added the CEO.

The boom in demand means that ASML’s executive team now expects the company to post a 35 per cent jump in sales this year, compared with the €14 billion total posted in 2020 - itself a record.

“Clearly we have seen in 2021 the reaction of the electronic industry at large to the Covid year,” Wennink observed. “So you saw a catch-up effect, and I think that will stretch into 2022. Some supply chains have been disrupted, and it takes a bit longer [for them to recover].”

But beyond that, the CEO is expecting continued long-term demand growth to meet the needs of what he calls “intelligent distributed systems” that combine sensors with computation.

EUV capacity rising
The impact, in terms of demand for EUV lithography systems and the myriad optics and photonics components that perform critical roles inside them, looks enormous.

Wennink expects ASML to produce 55 of those tools next year, with 80 per cent of that capacity already booked. In 2023 the total should rise to more than 60 units, and grow further beyond that.

“You also have to realize, when you think about EUV, [you think] that customers buy machines,” he added. “But in fact they buy wafer capacity. So new machines like the NXE:3600D have a 15-20 per cent higher productivity.”

According to ASML the June quarter just completed saw the first such machine shipped to a customer. “We are now ramping EUV in volume production for memory [chip production], with plans to implement EUV on future nodes across three DRAM customers,” added the firm.

In terms of overall sales, ASML posted just over €4 billion in revenues in its latest quarter, down slightly on the same period last year. But if Wennink’s prediction proves accurate, the total for 2021 should end up in the region of €19 billion.

• Investors responded to the latest update positively, with ASML’s stock price rising around 3 per cent in early trading on the Nasdaq on July 21. At just over $705, the stock has more than doubled in value over the past year, and equates to a market capitalization of around $300 billion.