Lithography giant reports sustained high demand, including for its next generation of extreme ultraviolet tools. 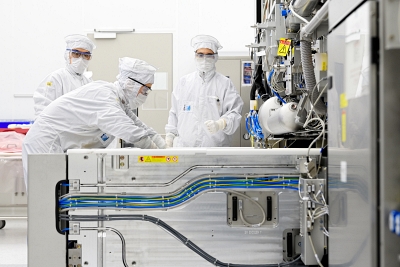 ASML has outlined plans to further increase its production of lithography tools for semiconductor chip production, with no sign of a let up in demand as supply constraints continue across a number of industries.

CEO Peter Wennink told investors that ASML was running at “maximum capacity”, with virtually every customer ASML had ever dealt with currently looking to buy new equipment.

“We continue to see that the demand for our systems is higher than our current production capacity,” Wennink said, adding that as well as offering high-productivity upgrades and reduced cycle times, ASML was actively working with its huge network of suppliers to significantly expand capacity.

“In light of the demand and our plans to increase capacity, we expect to revisit our scenarios for 2025 and growth opportunities beyond,” added the CEO. “We plan to communicate updates in the second half of the year.”

High-NA tool under construction
ASML’s CFO, Roger Dassen, said that the company was looking at the feasibility of raising annual shipments of current EUV tools from 55 now, to 90 by 2025. Annual shipments of deep-UV tools, which are not nearly as complex as EUV machines, could rise to 600 over the same period.

If ASML and its supply-chain partners can achieve that it would represent a significant increase from the 2025 capacity targets of 70 EUV and 375 DUV tools, outlined as recently as October last year.

Dassen added that the first research-level high-NA EUV tool was now under construction at ASML’s headquarters in Veldhoven, with orders from five customers now received - three to make logic chips and two to make memory devices.

“I would say both on the technical side but also on the commercial side, [there is] really good progress being made on high-NA,” he said.

Although ASML’s €3.5 billion sales in the opening quarter were down on the same period last year, that reflects a change in accounting procedures made by the company as it looks to ship systems to customers more quickly, and Wennink and Dassen reiterated their expectations that annual sales this year would rise 20 per cent on the all-time high of €18.6 billion posted in 2021.

Evidence of the continuing surge in demand appears more obviously in the firm’s order book, with some €7 billion placed in the quarter just completed - €2.5 billion of which relates to EUV equipment.

Supply chain efforts
ASML’s backlog (now standing at a record-breaking €29 billion) means that any tools being ordered now are unlikely to arrive much before the end of next year, with Wennink suggesting that the industry had under-estimated the sheer breadth of demand for semiconductor devices in all manner of applications - partly causing the current supply crunch.

The CEO illustrated that by reporting that one industrial conglomerate he met with recently had even resorted to buying up washing machines, simply to rip out some of the chips inside so that they could be used inside industrial motors.

”We’re pulling out all the stops, in terms of cycle times, and process efficiency,” Wennink added, pointing out that the planned capacity increase will take a couple of years to complete - and that even if demand was to slacken in response to a global economic slowdown, it was still likely to exceed ASML’s production capacity for the foreseeable future.

Achieving the planned increase in capacity will be largely due to the efforts of the firm's suppliers, with ASML ready to assist as necessary, and providers of lasers and other optics and photonics devices will be playing a key role.

Regarding high-NA EUV technology, such is the complexity of the equipment - in particular the new optics devised by key partner Zeiss - that it will be 2025 before customers use them to make chips, with a high-volume ramp anticipated a year after that.

• Following the latest update, ASML’s stock price rose in value by around 5 per cent. The Netherlands-headquartered company’s shares are currently worth around $640 on the Nasdaq exchange, reflecting a market capitalization in the region of $270 billion.