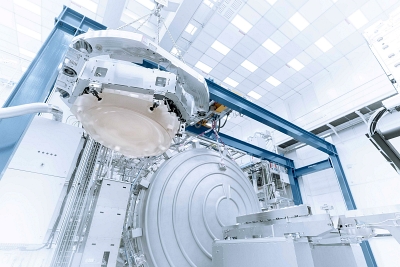 Zeiss has reported a sharp increase in sales in its latest half-yearly results, with demand for optical systems used in semiconductor manufacturing leading the way.

The Oberkochen, Germany, company - arguably the best known brand in optics - posted a record-breaking €4.1 billion in revenues for the six months ending March 31, up 20 per cent year-on-year.

That boom was also reflected on the bottom line, with earnings before interest and taxes (EBIT) up 24 per cent, to €731 million. And the trend looks certain to continue, with Zeiss booking nearly €5.5 billion in new orders.

CEO Karl Lamprecht pointed out that although the semiconductor manufacturing technology (SMT) division registered the fastest growth within the company, all four business segments had contributed strongly.

“We have a global setup, a broad portfolio and have even increased our expenditure on research and development,” he observed. “We are reaping the benefits of this at the moment and this is reflected in our half-year figures, our growth and our capacity for innovation.”

High-NA optics
With strong demand for both state-of-the-art extreme ultraviolet (EUV) and deep ultraviolet (DUV) lithography systems as the chip industry attempts to catch up with customer orders, Zeiss’ high-specification optics represent a critical element of the industry’s supply chain.

”Alongside digitalization, trends such as artificial intelligence or autonomous vehicles have further propelled the semiconductor market to an all-time high,” Zeiss said. “In the future, the next EUV generation, high-NA [numerical aperture] EUV, will enable the production of more powerful and more energy-efficient chips at lower costs.”

High-NA EUV lithography is still at the development stage, with the first such systems recently installed for research purposes at key partners ASML and imec.

The complex optical systems needed for high-NA patterning, which enables even more intricate circuit designs than is possible with regular EUV tools, are also much larger than predecessors - as can be seen in the accompanying image provided by Zeiss (see above).

ASML, which has cornered the market for EUV systems following its huge investment in research and development, said last month that although it was already receiving orders for high-NA EUV equipment, it would be 2025 before those customers begin making chips with those tools commercially.

With sales of €1.17 billion in the six months ending March 31, up 28 per cent, Zeiss’ SMT division now represents the largest of the firm’s four business units.

Next largest is the Zeiss medical technology division, which specializes in advanced surgical and microscopy equipment, with sales rising 15 per cent to nearly €1.06 billion.

It ranks just ahead of the industrial quality and research business unit, where a 24 per cent increase in sales was driven partly by demand for microscopes - including electron microscopes - in areas including semiconductor and battery development.

Zeiss’ consumer division remains its smallest, with sales of €770 million up 13 per cent on last year’s figure.

Innovation ‘cornerstone’
Despite ongoing supply chain issues and the twin impacts of the war in Ukraine and the latest Covid-19 lockdowns in China, Zeiss has no plans to change its strategic focus on innovation.

It intends to continue making large investments in digitalization and increasing capacities, in particular within the SMT business unit.

“In conjunction with the consistently high expenditure on research and development, the Zeiss innovation strategy is a cornerstone of the company's expedited growth,” stated the firm.

During the latest fiscal period, research and development spending rose at an even faster rate than company sales, reaching €531 million.

Recruitment also continues apace, with 500 new employees hired by the SMT division since the start of the year. That brings the total Zeiss workforce to nearly 37,000 people, up 7 per cent in 12 months.

Looking ahead, CEO Lamprecht emphasized that the Covid-19 pandemic was far from over, and that the war in Ukraine could cause further disruption to supply chains, but he still expects all four Zeiss divisions to continue growing through September.

“It is crucial that we remain close to our customers, provide them with optimum support in the face of these new challenges, and that we - and this is typical for Zeiss - continue to heavily invest in the future,” he said.

The firm's latest half-yearly sales total of €4.1 million means it is well on the way to eclipsing last year's record-breaking annual sales figure of €7.5 billion.