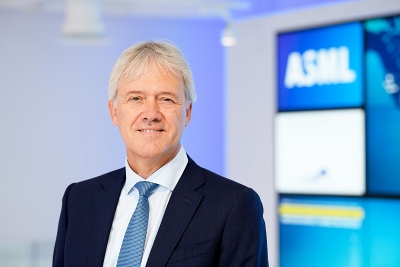 ASML says that it now expects to ship 55 extreme ultraviolet (EUV) lithography systems next year, as the benefits of the laser-driven technology see it find more deployments in logic and memory chip production.

The Netherlands-based company made the prediction in its latest quarterly financial report, where EUV equipment accounted for almost exactly half of €4.7 billion in new bookings.

Company CEO Peter Wennink and his executive team are now expecting sales in 2021 to jump 30 per cent on last year’s total, after a “significant increase in demand” across all markets.

“I think next year the demand curve that we’re currently seeing is continuing sharply because of high demand,” Wennink said of the EUV business. “The systems next year will be NXE:3600D’s, which is basically the successor of the NXE:3400, the C version.”

The CEO added that those new systems, which are set to be introduced later this year, will be able to pattern 15-20 per more wafers per day than the current version.

Chip shortage drives demand
At €4.4 billion, ASML’s sales in the three months ending March 31 were similar to the December 2020 quarter, but around 10 per cent higher than the company had predicted as recently as January.

“Customers are short of wafers,” said Wennink. “You just read the papers, [there are] chip shortages everywhere. The most effective and efficient way to increase wafers is to upgrade your machines with higher productivity.”

In the short term, the CEO explained, that can be done through software upgrades. And that was largely the reason for ASML’s better-than-expected finances in the latest quarter, with the high-margin upgrade business also boosting the firm’s profitability.

Discussing those chip shortages more broadly, Wennink said that major trends including the global roll-out of 5G wireless services, plus the growing adoption of high-performance computing and artificial intelligence (AI) technologies were behind the sudden rise in demand.

If those predictions are accurate, ASML ought to post sales in the region of €18 billion for 2021, compared with the record-breaking total of €14 billion last year.

Technological sovereignty
Wennink added that, in retrospect, he thought chip manufacturers had been too cautious with their spending at the onset of the coronavirus pandemic, and that this “underspend” was now translating into the current level of excess demand.

And although that will likely taper off by next year, the chip and computing requirements for the global digital transformation should see strong demand continue for several years.

At the same time, a third critical trend is geopolitics, with all major regions looking to establish “technological sovereignty” - in other words, self-sufficiency in electronics and semiconductors. This will lead to a shift away from today’s globalized semiconductor ecosystem, thinks the CEO.

“We’ve seen announcements [from] governments, but also companies, focusing on expanding capacity,” Wennink observed. “In the US, in Europe, [and] in Asia.

• Following the latest update from ASML, the company's share price jumped in value by nearly 4 per cent. At around $640 in pre-market Nasdaq trading on April 21, the stock was close to an all-time high, with a market capitalization now in excess of $265 billion.