Commercial systems with high-NA optics to appear within five years, prolonging the rule of Moore’s law. 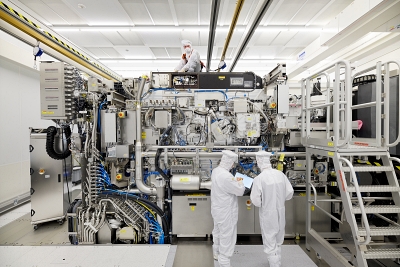 The semiconductor lithography equipment giant ASML has raised its growth expectations for the coming years, with progress in extreme ultraviolet (EUV) technology central to its plans.

In 2025, the Netherlands-based company now thinks that its sales could be anywhere between €24 billion and €30 billion - compared with its previous outlook of between €15 billion and €24 billion.

That thesis is being driven by a number of factors aside from the proliferation of chip devices across numerous industrial and consumer markets - notably the current supply “crunch”, and political moves to establish new semiconductor technology “sovereignty” in both the US and Europe.

The upshot is that ASML now expects the market for lithography equipment - which it has come to dominate with the development of EUV - to grow at an average annual rate of nearly 14 per cent between 2017 and 2025.

By then, said Wennink, two-thirds of ASML’s revenues from systems sales will result from EUV. That is in fact a lower proportion of total revenues than the company had previously anticipated - reflecting even faster growth in demand for deep-UV (DUV) lithography tools.

“We need to add capacity,” said the CEO. “Both in DUV and EUV.” The upshot should see ASML sell 50 per cent more DUV tools in 2025 than in 2020 (to around 375 units), with EUV shipments doubling over the same time period.

To achieve that, Wennink thinks ASML will need to expand its employee headcount by around 20 per cent from the current level of 30,000, and figure out ways to make its tools more quickly.

According to ASML’s CFO Roger Dassen, the continued boom in demand could see the company sell as many as 70 conventional EUV tools in 2025, if the upper end of market expectations are hit. The lower end of the future scenario would see 48 EUV tools sold.

High-NA engine
The emergence of high-NA optics, which ASML is developing with key collaborator Zeiss, is seen as the “engine” that will drive the lithography roadmap into the 2020s - bringing Moore’s law with it by enabling further shrink of critical device features.

ASML’s CTO, Martin van den Brink, said during his investor day presentation of the high-NA optics: “We have finished the design, and have started integration, qualification, and optimization of the system.”

Like the first generation of EUV equipment, the high-NA systems are first expected to be deployed to pattern critical layers in logic devices, before being adopted in DRAM memory chip fabrication.

Regardless of the EUV system generation, high-performance lasers and optics form critical elements of the EUV light sources, and the application has become a major revenue stream for Trumpf and other key suppliers.

According to van den Brink, increasing the numerical aperture of the Zeiss-built optics from 0.33 to 0.55 will enable 1.7x smaller features and close to three times the feature density in patterned wafers.

Common elements
The CTO also pointed out that the coming generation of equipment would prove easier to adopt than the initial EUV roll-out, because much of the supporting technology, most obviously the source element, has already been developed.

“High-NA EUV is in the realization phase,” he told investors, with the technology now expected to reach high-volume status in 2025 or 2026.

Christophe Fouquet, who heads up the EUV business unit at ASML, added that demand for EUV systems for DRAM device production was now likely to be higher than initially anticipated by the firm.

“We were very confident for many years that EUV would have a major impact in logic, because we saw a lot of complexity coming up with multi-patterning [using DUV].” said Fouquet.

“For a long time it was less obvious for DRAM, [but] in the last two or three years we have seen the adoption of EUV by all our DRAM customers.”

Fouquet said that, by 2025, opportunities in DRAM production will likely account for around 30 per cent of the overall demand for EUV equipment.

And while he admitted that the introduction of the first generation of EUV tools was a huge challenge - especially regarding the complex light source - Fouquet echoed van den Brink’s comments regarding the commonality of many of the supporting elements of the high-NA equipment.

“The change will be mostly limited to the optics, the illumination,” he said, adding that a giant metrology system needed to check the high-NA optics was now fully operational at Zeiss.

Showing an image of the 0.55 NA mirror with a diameter of approximately one meter, Fouquet said that a finishing accuracy of 20 picometers was needed across the entire mirror to achieve the necessary defect-free image resolution for patterning a silicon wafer.

That extraordinary level of precision is equivalent to the thickness of a human hair across the entire surface of planet Earth, he pointed out, adding: “The good news is that those mirrors are now being produced.”