Proposal aims to more than double the continent’s share of global semiconductor production by 2030. 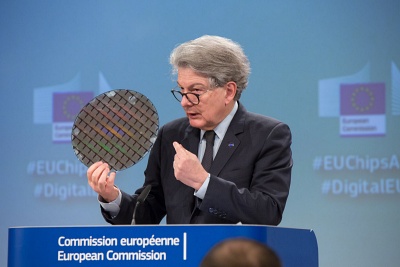 The European Commission (EC) has revealed a package of proposals aiming to quadruple semiconductor device production across the continent by 2030.

Outlining measures that would “mobilize” more than €43 billion in public and private investment by the end of the decade, the move is intended to restore technological sovereignty that has been lost in recent years.

In a release from the EC, its president Ursula von der Leyen said: “The European Chips Act will be a game changer for the global competitiveness of Europe's single market.”

“With the European Chips Act, we are putting out the investments and the strategy,” she added. “But the key to our success lies in Europe's innovators, our world-class researchers, in the people who have made our continent prosper through the decades.”

Supply crunch hits all sectors
As well as helping prevent future crises due to supply chain disruptions, von der Leyen said that the investment would re-establish Europe as an industrial leader in a sector of enormous strategic importance, with semiconductor chips fundamental to virtually every industry, from automotive to healthcare and defense.

The EC’s official communication to the European Parliament and Council pointed out that the current supply crunch has meant delays in the delivery of specialized chips for healthcare devices such as intensive care monitoring equipment, pacemakers, blood sugar monitors and defibrillators, with potentially life-threatening consequences.

“Credit cards cannot be produced in sufficient numbers, consumer electronic devices are out of stock,” it said. “Strategic sectors such as defence, security and aerospace are also under threat. Unreliable counterfeit chips have begun to infiltrate the markets, compromising the security and reliability of electronic devices.”

The current shortage is seen as unlikely to be resolved before 2023 or even 2024, contributing to global inflationary pressures. “As demand will further accelerate and production capacities take time to consolidate, shortages for chips will continue, and inflationary pressure will intensify,” the EC wrote.

The most ambitious tech plan enabling Europe to become a world leader in #semiconductors again.

🔜 Europe to be a net exporter! pic.twitter.com/57yD21OwrM

Capacity ramp required
Despite the fact that its global share of chip production has halved since 2000, Europe remains home to several major semiconductor companies and equipment providers - not least ASML, whose laser-driven extreme ultraviolet (EUV) lithography systems are critical for making cutting-edge logic and memory chips.

Last month, ASML’s CEO Peter Wennink said that the past two decades had seen Europe’s share of global chip production shrink from 20 per cent to around 8 per cent - and that with the industry expected to double in value between now and 2030, that share would likely dip below 5 per cent without some intervention.

The EC recognized those figures in its communication, but also observed that the continent still has the relevant assets to become an industrial leader in future semiconductor markets.

Its ambition is to return to at least a 20 per cent value share of global production of cutting-edge devices by 2030, implying that chip production in Europe would need to more than quadruple from current levels by that time.

“To achieve this, Europe will have to substantially increase its production capacity, and establish capabilities in leading-edge technologies,” wrote the EC. “Without rapid and sufficient investments, Europe’s market share will drop to less than 5 per cent.

“It could also delay the adoption of next-generation chips by European industry, putting its broader competitiveness and technology autonomy at risk.”

This ambition will be backed with considerable investment.

The #EUChipsAct will enable €15 billion in additional public and private investment by 2030.

On top of the €30 billion already planned from #NextGenerationEU for example.

Research efforts ‘not sufficient’
The EC’s communication goes on to point out that although Europe has supported the sector through its framework research programs, and previously set ambitious market share goals, the focus on research and development was “not sufficient” to address the scale of the challenge facing the sector.

“A more comprehensive set of actions and financing schemes is needed, and a much closer collaboration of supply and demand side actors,” it wrote.

Overall, the package of policy-driven investment needed to support the Chips Act is estimated to be worth in excess of €43 billion between now and 2030. That total, which comprises spending by both the public and private sector, includes €11 billion envisaged through the “Chips for Europe Initiative”.

That portion is intended to finance technology leadership in research, design and manufacturing capacities, by pooling investment from the European Union and its member states, alongside private investment.

It will be complemented by equity support to start-ups, scale-ups and other companies in the supply chain, through investment facilitation activities described collectively by the EC as the ‘Chips Fund’ worth at least €2 billion, with additional support from European Investment Bank loans.

Quantum pilot lines
With fierce global competition, not least via a similar investment mechanism in the US, the spending still comes with major risks. The EC is aiming to alleviate some of that risk by creating pilot lines to prototype and scale up new device types, providing a bridge from laboratory demonstration to production in a manufacturing facility.

The EC communication also highlights a possible overlap with emerging quantum technologies, stating that it will support efforts to accelerate the development of chips exploiting quantum effects, including the possibility of quantum-specific pilot lines.

“Reinforcing Europe’s leadership capacities in semiconductors is a precondition for its future competitiveness, and a matter of technological sovereignty and security,” concludes the communication.

“Implementation of the Chips Act Package will be a major step in addressing Europe’s structural weaknesses in semiconductors and reinforcing its place in a global and interdependent ecosystem.”

Next steps for the proposals will involve discussions with the European Council and the European Parliament, with the EC saying that it wants to turn “ambition into reality” in the shortest possible time frame.”

Responding to the EC announcement, ASML said it supported the proposals, but that the focus of the intervention should not just be on chip production in Europe.

"It needs to secure Europe’s relevance in the global semiconductor ecosystem by increasing the capabilities and performance of European products and technologies that others rely on," stated the Dutch equipment firm in a position paper.

"Europe needs a long-term semiconductor innovation roadmap to guide investment decisions. To define this roadmap, the European semiconductor alliance should bring together the manufacturers of semiconductors, their customers in the major European end-markets, world-leading equipment and materials suppliers, research and technology organizations and policymakers."