Combined with ultrasound, the 'Imagio' system helps distinguish between benign and malignant tumors. 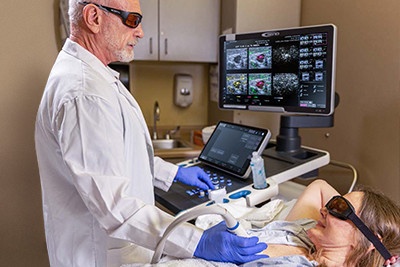 Seno Medical, the San Antonio, Texas, company that has been developing optoacoustic imaging technology for several years, has officially launched the commercial version of its latest “Imagio” system.

Combining non-invasive optoacoustic and ultrasonic techniques, the system is able to differentiate between benign and malignant tumors - thus ruling out cancer in many patients, and reducing the number of unnecessary invasive biopsies that are taken after “false positive” breast cancer screening.

That is possible because the optoacoustic element is able to identify growths accompanied by new blood vessels, or neoangiogenesis, and reduced oxygenation - two key signs of malignant growth.

In a clinical trial that concluded last year the Imagio system was found to perform significantly better than ultrasound alone, and it is hoped that a successful roll-out of the technology across the US could reduce the number of unnecessary breast biopsies taken significantly. The latest version of the system received US Food & Drug Administration (FDA) approval earlier this year.

How it works
The optoacoustic technique works by using two laser wavelengths, one of which is tuned to the absorption wavelength of hemoglobin, to look for signs of tumor neoangiogenesis, where new blood vessels produced by malignant tumors help supply nutrients to and remove wastes from the tumor.

Any laser absorption heats up and expands the hemoglobin, generating a sound pressure wave that radiates to the surface of the tissue. That sound wave can be captured using an array of piezoelectric transducers, similar to those used in conventional ultrasound imaging.

“The Imagio reconstruction algorithms can then determine the spatial location of those optical absorbers from the captured ‘time-domain’ data,” explains Seno.

By using alternating laser pulses emitting at two different wavelengths, the relative difference between oxygenated and de-oxygenated hemoglobin can be calculated and displayed in real time - in tandem with the conventional ultrasonic image showing the presence of a growth.

“Optoacoustic imaging looks for the presence of malignant masses [that] cannot grow larger than 2-3 mm without generating neovessels.

“Inside vessels supplying and draining a malignant tumor, the hemoglobin gives up its oxygen to the rapidly growing cells and becomes deoxygenated. The combination of hemoglobin concentration and its relative oxygenation has been shown to have good diagnostic accuracy.”

“Optoacoustic imaging may permit the identification of tumors as small as 3 mm and has demonstrated the ability to see sub-millimeter vascular structures,” Seno adds. “Early detection is important, because biologically advanced tumors are more capable of metastasis.”

The company chose to officially launch the latest commercial version of the Imagio imaging system at the Radiological Society of North America (RSNA) Scientific Assembly and Annual Meeting, which is taking place in Chicago this week.

Tom Umbel, the CEO of Seno Medical, said: “The time has come for the market to start adopting and using this groundbreaking new hybrid modality for breast imaging, and we are proud to be showcasing it at RSNA.”

The company is also embarking on a tour across the US dubbed “Scans Across America”, with clinicians able to trial the Imagio system on board a dedicated bus.