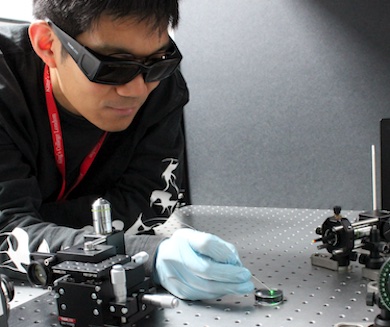 On point: photoacoustics in a medical needle

A collaboration between King’s College London and University College London (KCL and UCL) has developed a miniaturized photoacoustic endomicroscopy probe that could help guide clinicians during surgery.

Published in Biomedical Optics Express, the results of the project exploit the combination of photoacoustic (PA) endoscopy, able to reveal structural and molecular details through optically created ultrasound waves, and multimode fibers (MMFs), characterized by ultrathin size and low cost.

"Traditional light-based endoscopes can only resolve tissue anatomical information on the surface and tend to have large footprints," said Wenfeng Xia, leader of the research team from the KCL School of Biomedical Engineering & Imaging Sciences.

"Our new thin endoscope can resolve subcellular-scale tissue structural and molecular information in 3D in real-time, and is small enough to be integrated with interventional medical devices that would allow clinicians to characterize tissue during a procedure."

Current PA endomicroscopy probes can be constrained by either a bulky ultrasound detector or a low imaging speed, either of which can hinder their usability, The project tackled this problem by combining wavefront-based beam shaping with light-based ultrasound detection, plus a fast algorithm for controlling the device.

"This needle probe comprises a MMF for PA excitation laser delivery, and a highly-sensitive fiber-optic microresonator sensor for ultrasound detection," noted the project in its BOE paper. "As wavefront shaping employs a high-speed digital micromirror device, the imaging speed was improved by more than two orders of magnitude as compared to that with a liquid crystal spatial light modulator."

The platform's micromirror device consisted of "nearly one million tiny mirrors that can be independently flipped at tens of thousands of frames per second, to change the wavefront of the light so that it can be focused and scanned quickly."

The optical microresonator used to detect the ultrasound signals was developed by UCL, building on existing work into the advantages of all-optical ultrasound platforms. When sound waves hit the microresonator its thickness changes, which in turn modifies the amount of light that is reflected back into the fiber and allows optical detection of the acoustic waves, according to the project.

In trials, the new probe was used to obtain high-resolution PA images of mouse red blood cells at 3 frames per second over an area 100 microns in diameter, described by the project in its paper as high-fidelity image acquisition at "an unprecedented speed."

The team also showed that its needle probe can be scanned over an area in order to significantly enlarge the field-of-view in real-time, and allow consecutive images to be stitched together without substantial degrading of image quality even under modest fiber bending.

Using MMFs could facilitate combining other imaging modalities with PA endomicroscopy to provide complementary information, by sharing the same MMF for light delivery. Multispectral excitation could also be implemented to provide functional information of tissues, according to the project.

"Although this work focused on the development of a photoacoustic endomicroscopy probe, the high-speed method used to deliver the excitation light can be used to incorporate other imaging modalities such as fluorescence imaging, Raman microscopy and two-photon microscopy," said Xia.