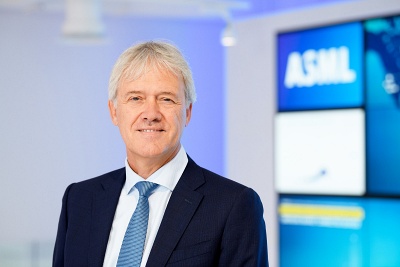 Semiconductor manufacturing equipment lynchpin ASML has confirmed plans to ramp up its output of lithography tools in response to growing demand from chip makers over the coming decade.

The tools, which are based around key components including state-of-the-art lasers and high-performance optics, will be needed to pattern wafers in a large number of new semiconductor fabrication facilities either under construction or being planned.

ASML’s stock price rose in value strongly following an update by the company’s lead executives at an investor day held November 11, with the valuations of Coherent and MKS Instruments - two major providers of lasers to the semiconductor industry - following suit.

By November 15, shares in all three companies were trading at least 20 per cent higher than their market valuations shortly before ASML’s announcement.

Joining the dots
Speaking during the investor day, ASML’s CEO Peter Wennink said that the level of growth now anticipated is significantly greater than he and his team had been expecting as recently as a couple of years ago - simply because they had “failed to join the dots” when it came to semiconductor industry megatrends.

Now, said Wennink - and despite what he thinks will be short-term macroeconomic uncertainty - the company predicts that the end market for semiconductor devices will increase at an average rate of 9 per cent per year through 2030.

That suggests the market will effectively double over the course of the current decade, from around $500 billion to more than $1 trillion.

And that means a similarly stratospheric rise in both wafer starts, and for the equipment like ASML’s that is needed to pattern devices with ever more intricate circuit designs.

“Moore’s law is still alive and kicking,” Wennink added. “And it’s about the cost per function.”

The megatrends driving that demand include a much more connected world, which in turn will require unprecedented data volumes, as well as greater emphasis on renewable energy sources as energy demand continues to grow, and a fast-growing but ageing population that will require investment in new forms of healthcare.

“The energy transition was not on our radar screen,” Wennink admitted. “It’s one of the many ‘dots’ created in the semiconductor space that we didn’t have a good [sight] of.”

Wind and solar requirements
The transition to renewable energy and electrification of transport will require significant amounts of power ICs, microcontrollers and other semiconductor devices in both generation and consumption activities, Wennink explained.

For example, recent estimates by power chip giant Infineon Technologies suggest that each megawatt of wind power capacity requires around €3000 in semiconductor content, while the equivalent figure for solar power is €4000.

Electric vehicles also need around twice as much semiconductor content as conventional combustion engined vehicles, equivalent to around €1500 per car - with advances in driver assistance systems pushing even more demand for optical and other sensor devices.

On top of all that is the drive for technological sovereignty, with huge new packages of support in the US, Europe, and Asia set to realize a large number of new fabs, as each region looks to eliminate the strategic risks of relying on a small number of chip manufacturers in a few key locations.

So far, the US has pledged $52 billion in spending via the CHIPS and FABS legislation, as well as investment tax credits, while the European Union’s own version of the CHIPS act has earmarked $46 billion.

China is allocating similar levels of funding to develop its domestic semiconductor industry, with smaller but significant plans enacted in Japan, Korea, and Taiwan.

Wennink believes that even this huge level of spending represents just the start of the sovereignty effort, because the rapid growth rate of the semiconductor market will demand a similar escalation in investment.

Mature demand
Perhaps surprisingly, it is in more mature chip technologies where ASML has underestimated market pull the most, meaning additional demand for the firm’s much older lithography tools that are based around large excimer lasers emitting deep-UV light, rather than the state-of-the-art EUV equipment.

“It’s a difficult market to understand, because it is so wide,” said Wennink, highlighting the additional need for mature semiconductors in “smart” electrical grids with more renewable energy connections, sensors for consumer goods, and electric vehicle power chips.

The drive for greater energy efficiency is also demanding a move to logic devices based on larger die sizes, meaning that even more wafer starts will be needed.

All told, that level of industry expansion means ASML thinks it needs to increase its DUV tool production capacity to 600 units per year in 2025-2026, alongside 90 “regular” EUV systems - three times the current EUV tool production rate. 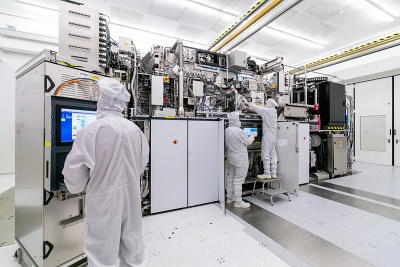 Supply chain strain
On top of that, the company now aims to deliver 20 of its developmental high numerical aperture EUV systems, which are based around much larger and more complex optics from Zeiss, per year - starting around 2027.

That all means 65,000 square meters of additional production space at ASML, roughly equivalent to an extra €500 million in annual capital expenditure over the next five years.

If Wennink and his team’s assumptions prove correct, it could see the company’s annual sales figure more than double to €40 billion by 2025, and even hit €60 billion by the end of the decade, if the upper end of expectations are met.

The additional requirements will also put extra demand on ASML’s supply chain - most obviously Zeiss and Trumpf, along with the various optics and photonics companies that provide key components for the firm’s giant systems.

According to a report from Bloomberg, the company may choose to tackle any supply-chain issues with acquisitions. Over the past decade, ASML has acquired excimer laser maker Cymer, optics firm Berliner Glas, and a 25 per cent stake in Zeiss’ semiconductor business to help meet its manufacturing requirements.